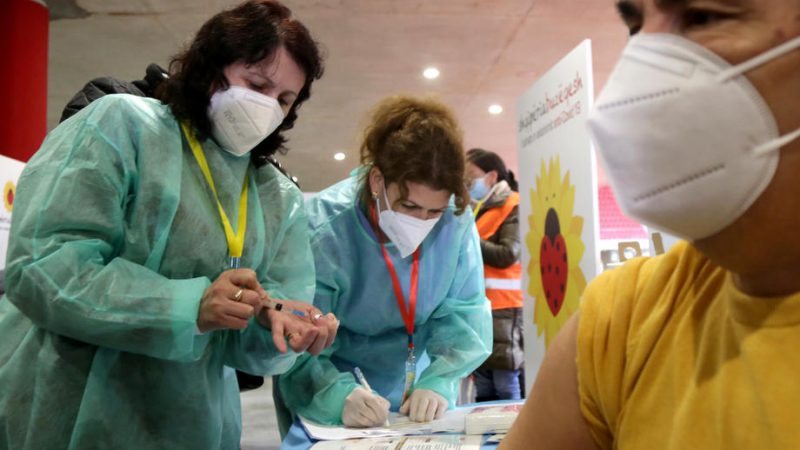 A health worker receives a dose of the Covid-19 vaccine at the Air Albania Stadium in Tirana, Albania. [EPA-EFE/Malton Dibra]

Albania is one of the countries with the lowest vaccination rates in Europe, with just 33% of the population fully vaccinated and 37% with one dose, according to Our World in Data and reported by Exit.al.

Since vaccination started in January 2021, the vaccination rate has decreased overall. Furthermore, Albania remains below the global average of 53%, having had the first dose.

It is sixth from the bottom out of the whole European continent when it comes to vaccination rates. Only Moldova, Bulgaria, Bosnia and Herzegovina, Ukraine and Belarus fare worse. Top of the list is Malta, followed by Iceland, the UK, Spain and Portugal.

Vaccine hesitancy in Albania and throughout many other Balkan and Eastern European countries is fuelled by disinformation, fake news, and a distrust of the state. It is further exacerbated by a lack of coordinated campaigns to instil trust in the process.

Confirmed cases remain relatively low at the moment- bucking the European trend- but this is likely due to a significant shortfall in the number of tests being carried out.