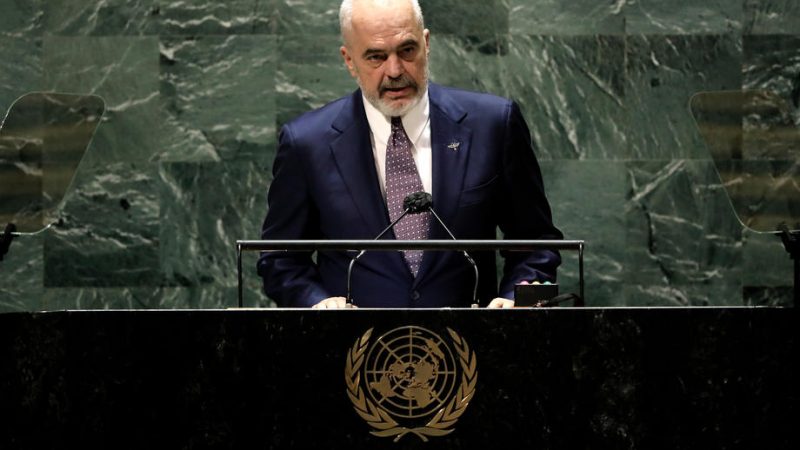 The Institute for Democracy, Media and Culture presented the petition, which will also be presented in parliament in the hopes of curbing the influence of the regime that fell 30 years ago, and its dictator Enver Hoxha. [EPA-EFE/PETER FOLEY]

Albanian Prime Minister Edi Rama met with US Secretary of State Anthony Blinken in New York after participating in a meeting of the UN Security Council of which Albania is a non-permanent member for 2022-2023.

The US Embassy in Tirana said the two leaders discussed bilateral, regional, and global issues.

The US and Albania are co-pen holders at the UN Security Council on the issue of Ukraine, which has been high on their agenda.

In a press conference with Albanian journalists on Wednesday, Rama said his government was prepared in the event of a possible escalation of the Ukraine-Russia conflict.

“We are very well aware of the responsibility vested in us by virtue of the position we now hold in the international arena thanks to our seat in the Security Council,” he stated.

The prime minister assured that Albania’s work at the UN Security Council would be in full collaboration with the US and other Western countries. Earlier this week, the country’s interior minister said a resolution on Ukraine was not yet on the table for parliament.

Following the meeting, Blinken celebrated the 100th anniversary of diplomatic relations between the US and Albania.

“Glad to host Albanian Prime Minister Edi Rama and celebrate the 100th anniversary of U.S.-Albanian diplomatic relations. Looking forward to the next 100 years!” he wrote on Twitter.