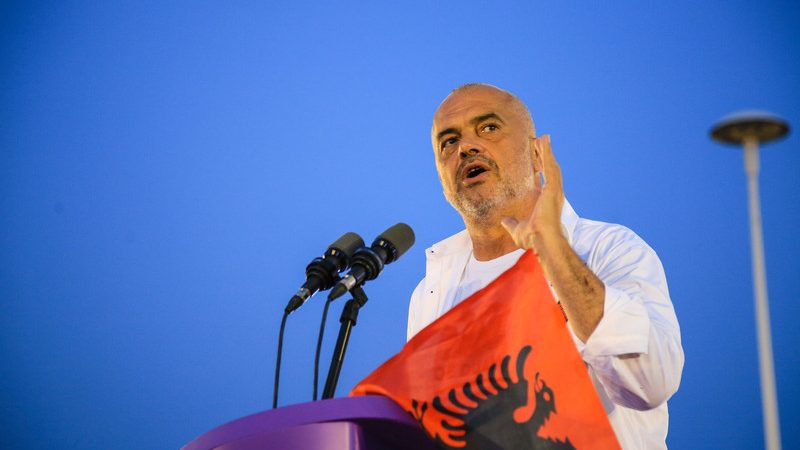 Albania had failed to achieve visible progress in its EU path since 2014 when the country was granted EU candidate status shortly after Rama came to power. [EPA/MALTON DIBRA]

In a press conference with the President of the European Council Charles Michel, the two politicians stressed that the new initiative does not intend to create more barriers to the Western Balkan countries’ integration into the European Union. On the contrary, it aims at enabling “immediate political integration” with all EU member states, Rama claimed.

Albania had failed to achieve visible progress in its EU path since 2014 when the country was granted EU candidate status shortly after Rama came to power.

President Michel maintained that the EU accession process for the Western Balkans should be pushed forward, and talks for Albanian and North Macedonia should start as soon as possible. He announced his decision to invite all leaders of the WB countries to the June summit of European leaders when they are expected to decide on the region’s steps forward toward the union.

He revealed that Rama had told him earlier, and he had agreed that it was “extremely important” for the WB countries to have a political platform where leaders could meet regularly with their European counterparts and discuss common issues while their governments work to meet the EU accession criteria.

Rama added that he had discussed this idea with President Michel and with a number of other European leaders.

“I have discussed this for a long time not only with the President of the European Council, but also with the French President, the previous and the new [German] Chancellor – the idea being the need for the EU to overcome this stage in which our whole relationship – as Albania but also as WB countries – goes only through the European integration process, chapters or clusters, etc., and take further steps to bring the WB much closer from a political standpoint […] by putting in place an immediate political integration,” he stated.

Such political integration would entail the participation of WB leaders in meetings with European leaders and involvement in the drafting of decisions related to security and crisis issues, the Albanian prime minister explained.

Both leaders praised a proposal within this idea for an “EU associate member” status to be granted to certain countries. Rama added that it would be a great achievement for Albania to be granted such status.

“The idea of an ‘EU associate member’ is attracting increasing support […], I have followed and I fully support the vision of the French President for this new European community,” Rama stressed.

In addition, President Michel expressed his “personal” support for Rama and Vucic’s Open Balkan area, thus becoming the first top EU leader to mention the initiative’s name. He said he hoped all countries joined in.

So far, Kosovo, Montenegro and Bosnia and Herzegovina have refused to be part of the initiative launched by Serbia, Albanian, and North Macedonia.

Nearly three years since the Open Balkan was announced, it remains unclear if and what it would add to the much more robust Common Regional Market, and why Albania, Serbia and North Macedonia have chosen to go on a parallel track instead of implementing the latter together with the rest of regional countries.