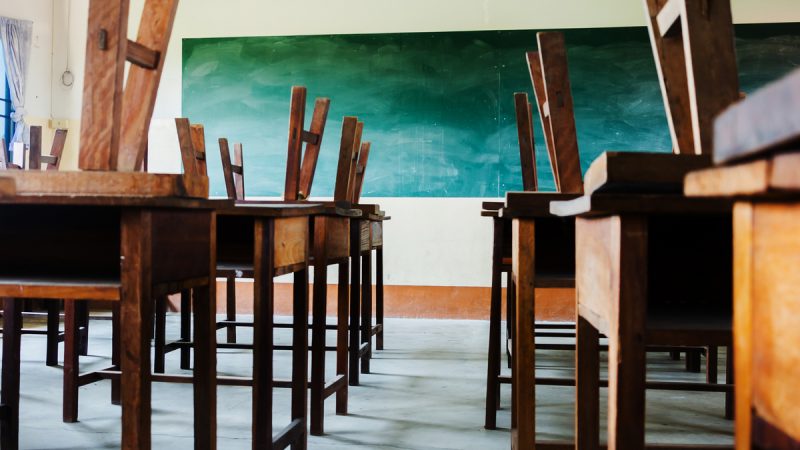 “The children and young people coming from Ukraine will be integrated into the Education system as soon as possible,” the education ministry’s office has said. [Shutterstock / Yupa Watchanakit]

Activists in the Albanian capital of Tirana protested the three-day closure of schools due to cold temperatures outside the education ministry, while accusing the government of misspending taxpayer funds.

All schools throughout the country would be closed for at least three days from 24-27 January because of forecasted temperatures hitting as low as -18 degrees celsius, Education Minister Evis Kushi announced last week.

The move sparked anger from parents and activists who argued that schools should provide adequate heating for students.

The group, Qendresa Civar protested in front of the ministry Monday morning and activist Migen Qiraxhi, told the media that a situation where schools are closed because of a lack of heating during the winter is unacceptable.

“No one can be surprised that in January and February it gets cold. We are here to address the problems of teachers, a community that has been burdened with all difficulties. This profession has physical costs. They have no support for COVID, extra hours, working shifts. And children’s learning is impaired,” Qiraxhi also said. “Students take wood to heat the classrooms. In Berat, classes are held in Eurolotto [a gambling shop] because the school is damaged. Education has no infrastructure,” he added.

Many state schools across the country do not have heating or cooling systems. In remote areas, many schools lack running water and toilets and have structural damage, including holes in the roofs, cracks, and a lack of proper glazing.

In January 2021, students in Elbasan in central Albania protested against a lack of heating in their schools. Teachers told the media that children have to wear extremely thick clothing to classes to not get cold. In the Elbasan region, most of the 200 schools do not have running water or toilets.

In 2020, just 3.4% of Albania’s GDP was spent on education, making it one of the lowest ranking countries in the world in terms of education spending. Spending in 2020 was at the lowest level since 2015, at just over 10% of the budget.

In 2018, the Albanian Coalition for Education said the government had been promising to increase educational investment to 5% of the GDP for six years.

This issue was also highlighted following the COVID-19 pandemic when it became apparent some schools, particularly in rural areas, did not have basic facilities for students.

UNICEF also called on the Albanian government to increase spending to 5% as it would bring significant long-term economic benefits.

Following the protests, Kushi said the reason for closing schools was not because of a lack of heating but rather because of fears the water deposits would freeze. In addition, she said it was because children would have to travel in the cold to reach the school.

“Few schools in the country have problems with heating,” she said, adding that 1,100 teachers and 1,600 students are currently infected with COVID-19.