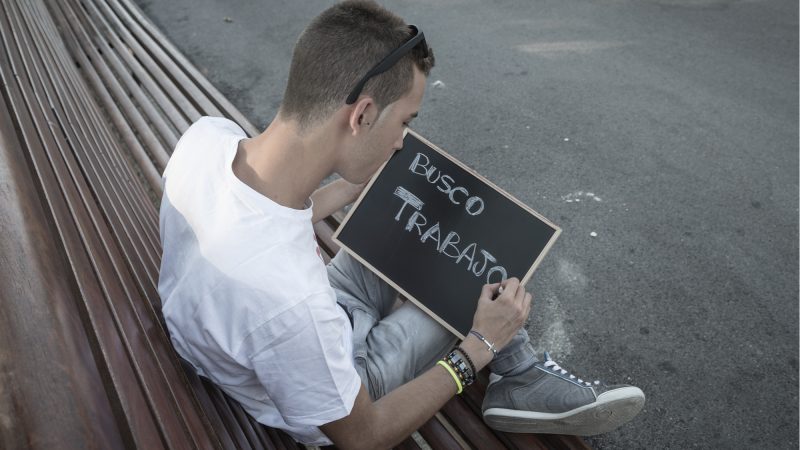 Young Spaniard writing 'I need job' in Spanish on a blackboard. [Shutterstock/Chanclos]

According to data from the labour force survey published by INE, travel restrictions and country-wide nightly curfews, in particular, have had a “tsunami effect” on the labour market, affecting tourist sector workers the most. Almost nine out of every ten jobs destroyed in Spain in 2020 belonged to the services and tourism sector, EURACTIV’s partner EFE reported.

After the bitter figures released on Thursday, analysts called 2020 “the worst year” in terms of employment in Spain since 2012.

The survey, however, considers the 800,000 workers currently benefitting from the temporary lay-off schemes (Expedientes de Regulación Temporal de Empleo, ERTE in Spanish), as employed, meaning they are not counted as “unemployed”.

Under ERTEs, the Spanish state gives workers about 70% of their salary and prohibits companies from firing people. In case of fraud or redundancies, companies must return exemptions from contributions to the social security system and risk heavy penalties, according to sources of Spain’s labour ministry.

The ERTEs were due to expire on 31 January, but the government coalition of PSOE socialists and left-wing Unidas-Podemos (United We Can), has extended them until 31 May – the day the Spanish state of alarm is set to expire.

However, the decline in the Spanish job market in 2020 affected almost exclusively the private sector as 125,800 public sector jobs were created last year. According to experts, the growth of the public sector is probably due to the need to strengthen health and education services to fight the pandemic.

In net terms, this means that more private-sector jobs were destroyed as the almost 750,000 destroyed jobs were offset by those generated in the public sector to give a net loss of 622,200 workers.