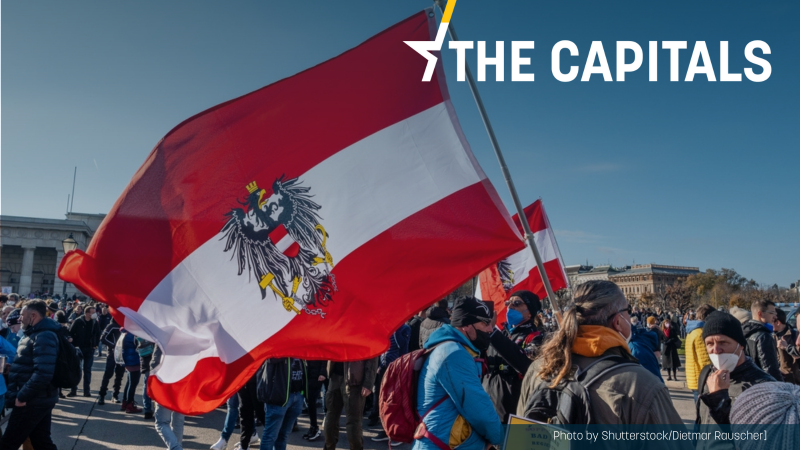 With the conservative ÖVP plummeting in the polls due to a series of scandals and the resignation of former chancellor Sebastian Kurz, a progressive coalition on the centre-left is now in reach for the first time in decades, according to recent polling. [Shutterstock/Dietmar Rauscher]

An Austrian anti-vaxxer party could stir up Austrian politics by entering parliament and preventing a progressive coalition on the centre-left from taking shape, experts say.

With the conservative ÖVP plummeting in the polls due to a series of scandals and the resignation of former chancellor Sebastian Kurz, a progressive coalition on the centre-left is now possible for the first time in decades, according to recent polling.

However, whether an Austrian version of a ‘traffic light’ coalition – between the Social Democrats, the Greens and the liberal NEOS – could form a majority, might well depend on the performance of the anti-vaxxer party ‘People Freedom Fundamental Rights’ (MFG).

The MFG, which is campaigning against lockdown measures and compulsory vaccinations, is currently polling at between 4 and 6%, which would allow them to enter the Austrian parliament.

“If there is the option of an Austrian traffic light coalition, chances are high that the three parties would form a government,” Laurenz Ennser-Jedenastik, Professor for Political Science at the University of Vienna, told EURACTIV Germany.

The anti-vaxxer party already managed to pull off a surprise result at the regional elections in Upper Austria in September. Starting from scratch, and despite having no substantial funding or media coverage, the MFG got more than 6% of votes.

“We are here to stay,” MFG party leader Michael Brunner stated at the time, adding that they would put an end to the “apartheid-like” corona policies of the government.

It remains to be seen whether the MFG will be able to establish itself long-term or if its success is only a “short blip,” Ennser-Jedenastik said.

While the next federal general election is scheduled for 2024, the growing unease in the conservative-Green coalition due to the recent government reshuffle could open the door for earlier elections.

Opposition parties are already calling for snap elections for the next year. and the Green party is giving mixed signals. While Green party leader and vice-chancellor Werner Kogler said in early December that he could not “rule out” a snap election, he later backtracked and stated that an election was off the table for now.

According to Ennser-Jedenastik, the Greens would only push for an early election if a centre-left coalition would be a likely option for the next government.

“If you are working strategically towards triggering elections to realise a centre-left coalition, you have to be certain of your success,” Ennser-Jedenastik said.