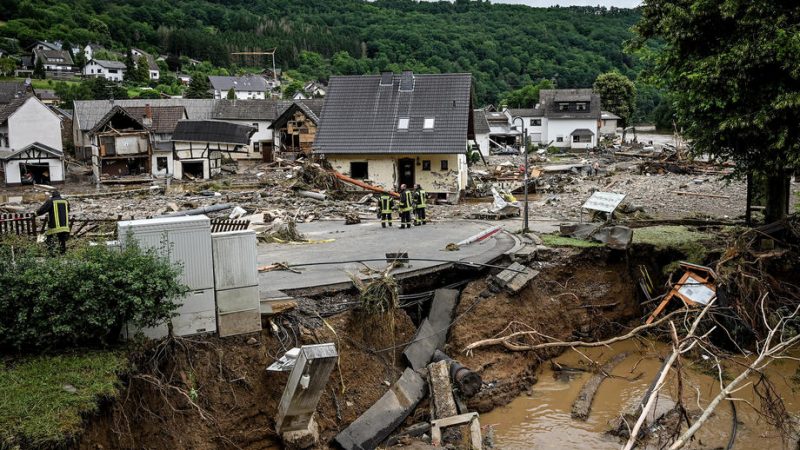 At least 42 people have died in Western Germany and dozens remained missing on Thursday after unprecedented flooding also hit Luxembourg, Belgium and the Netherlands.

“The EU is ready to help. Affected countries can call on the EU Civil Protection Mechanism,” she tweeted.

The German states of Rhineland-Palatinate and North Rhine-Westphalia were worst hit.

“We have never seen such a catastrophe before. It is truly devastating,” said Rhineland-Palatinate state premier Malu Dreyer.

Estimates of missing people are somewhere between 50 and 70, while the number of displaced people and property damage is yet to be determined, but sure to be high.

“I am shocked by the reports that reach me from the places that are now completely underwater,” said German Chancellor Angela Merkel, who is currently visiting US President Joe Biden in Washington.

In Belgium, Residents of Liège, Belgium’s third-largest urban area after Brussels and Antwerp, were ordered to evacuate, while around 10 houses collapsed in Pepinster after the river Vesdre flooded the eastern town and residents were evacuated from more than 1,000 homes.

Traffic on the river Meuse is also suspended as the major Belgian waterway threatened to breach its banks.

In the Netherlands, there have been no casualties reported, but thousands of people in towns and villages along the Meuse river have been urged to leave their houses quickly.

Flooding rivers damaged many houses in the southern province of Limburg and the city of Maastricht, where several care homes were evacuated.

The Luxembourg government has set aside €50 million to help those across Luxembourg affected by flooding that followed torrential downpours that forced thousands to evacuate their homes, Prime Minister Xavier Bettel said on Thursday.

The floods have revitalised the debate around the impacts of climate change in Germany, which may give the country’s Green party a boost in the polls ahead of September’s election. Others are accusing the Greens of attempting to gain political capital from the disaster.