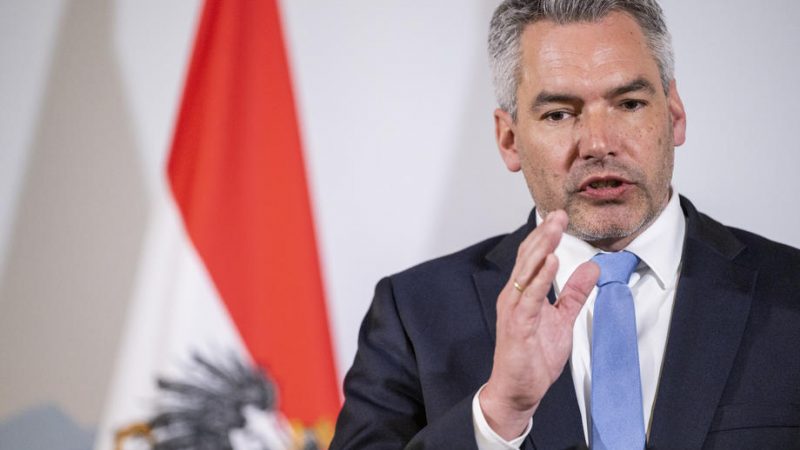 Nehammer will call experts, the crisis cabinet, factions within parliament and the national intelligence service for a security briefing to discuss the Austrian approach to deal with the situation. [EPA-EFE/ALESSANDRO DELLA VALLE]

Amid the imminent threat of Russian invasion, Austria established a crisis cabinet on Sunday to enable the government to take swift action should the conflict in and around Ukraine spiral out of control.

The cabinet includes all of the affected ministries – from energy to the foreign ministry – and will explore measures to counter the various scenarios in Ukraine.

“The situation in Ukraine is deteriorating by the hour, the spectre of war in Europe is unfortunately real. The goal of all of us is to prevent a war and keep all parties involved on the path of diplomacy and talks,” Austrian chancellor Karl Nehammer said.

If the Kremlin takes military action against Ukraine, the government will convene the National Security Council.

“We have to prepare for the worst scenarios. I already warned Brussels last week that Russia’s pledge to withdraw troops could be a ‘fake withdrawal.’ This fear has apparently come true,” Nehammer emphasised.

He stressed there are more and more incidents at the contact line in Donbas, and Ukraine is witnessing an “unprecedented disinformation campaign.”

Today, Nehammer will call experts, the crisis cabinet, factions within parliament and the national intelligence service for a security briefing to discuss the Austrian approach to deal with the situation.

The chancellor also said that Austria would closely collaborate with its EU allies. Today foreign minister Alexander Schallenberg will travel to Brussels to meet with his EU counterparts and Ukrainian foreign minister Dmytro Kuleba.