Austria, other EU countries, urge Commission not to give green label to gas 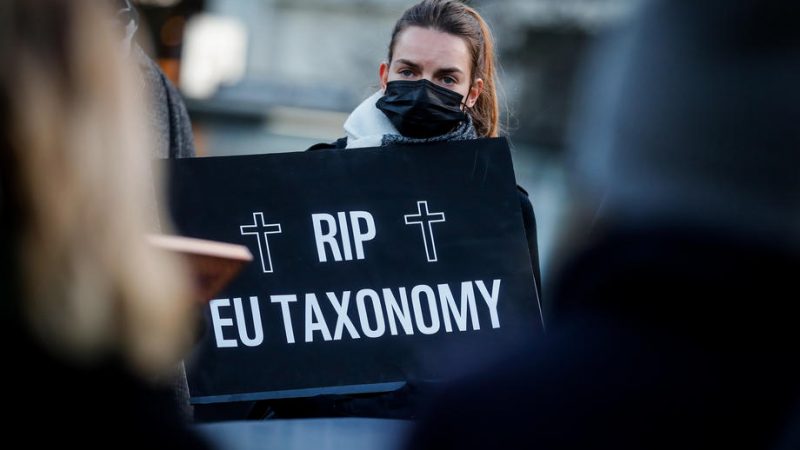 An activist holds a banner 'R.I.P EU Taxonomy' during an action organized by World Wide Fund for Nature WWF to protest against the European Commission's plan to classify the gas and nuclear sectors as sustainable in its taxonomy of economic sectors, in front of the European Parliament in Brussels, Belgium, 29 November 2021. [EPA-EFE/STEPHANIE LECOCQ]

The European Commission should not include gas in the current EU taxonomy, Austria, the Netherlands, Sweden, and Denmark wrote in a letter ahead of the Commission’s much-anticipated delegated act that will rule whether fossil gas or nuclear power are sustainable.

“We call upon the European Commission to not include any fossil gas activities as sustainable in the current Taxonomy,” the letter reads.

The four countries – Sweden and the Netherlands being in favour of including nuclear in the taxonomy – have joined forces to oppose the new German government’s push to give gas a green label with much laxer rules than initially envisaged.

The Commission should also respect the boundary of a maximum 100 grams of CO2-equivalent emitted per kilowatt-hour produced, the four countries wrote based on the assessment of the Commission’s finance expert platform, which criticises Brussels’ plans to give gas a green label.

The Commission is expected to present the rules under which nuclear power and gas will be considered sustainable on Wednesday (2 February).

One of the compromises observers expect to be struck includes limiting the green label to gas power plants that replace more polluting coal power plants. While Germany has lobbied to make this proposal less stringent on gas, the Austrian government opposes it.

Including gas in the taxonomy was undesirable even to replace coal, Austrian Climate Minister Leonore Gewessler told EURACTIV in November. “Just because something is less bad than coal doesn’t make it good or sustainable. It is still fossil energy,” she said.

While Austria had spearheaded an anti-nuclear alliance in the ongoing row over the so-called EU taxonomy, this latest push is in line with Vienna’s established position and could form part of its lawsuit against the taxonomy.