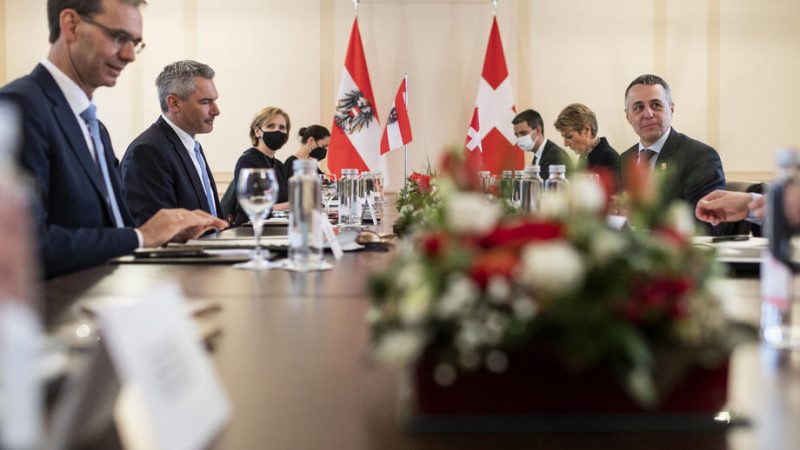 Austria will support Switzerland in its complex negotiations with the EU, Austrian Chancellor Karl Nehammer said during his inaugural visit to the country, where he also demanded the European Commission take Switzerland’s specific position more into account.

“The EU Commission also has to take the task, the particularities, but also the neighbouring states into account,” Nehammer said at the press conference following a meeting with Swiss counterpart Ignazio Cassis.

Talks aimed at tying Switzerland more closely to the single market failed last May when the Swiss government abandoned a draft treaty that would have integrated it further into EU. The Swiss government is currently working to renew negotiations with the EU to ensure close collaboration with the bloc – its biggest trading partner.

Austria wants to renew attempts to find common grounds in the negotiations, as Switzerland would be a “geostrategic partner” for the EU, Nehammer stressed.

“We want to build a bridge that we can get out of this stalemate,” he emphasised.

Last week, Cassis said that he would attempt to renew talks with the EU and that he is seeking a new package of bilateral agreements to move the country closer to the bloc.

“In the Federal Council, we are currently in the process of defining the framework for a possible package or an agenda for talks,” he told Sonntags Zeitung in early February.

Swiss-EU relations are currently governed by over 120 bilateral agreements, some of which date back to the 1970s. The treaty on EU-Swiss relations was envisioned to simplify the complex set of agreements and reduce them to a single framework to govern relations.