Austrian chancellor on EU taxonomy: “we have won a battle today” 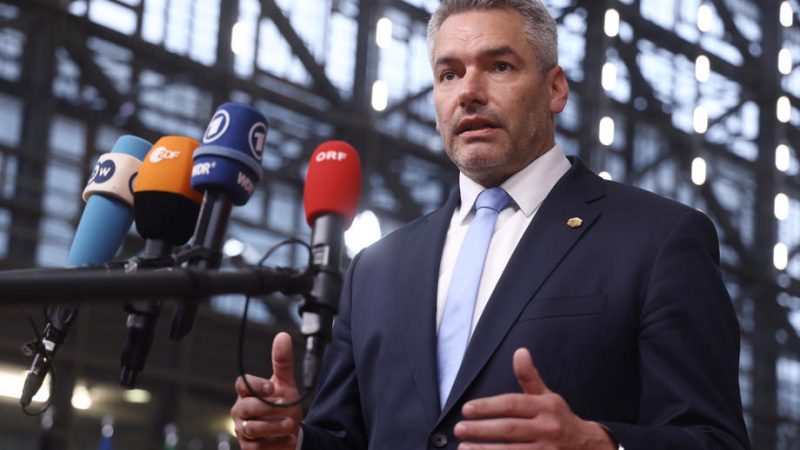 Chancellor of Austria Karl Nehammer speaks to the press as he arrives to attend a European Union Summit with all 27 EU leaders at The European Council Building in Brussels, Belgium, 16 December 2021. [EPA-EFE / KENZO TRIBOUILLARD]

According to Austrian chancellor Karl Nehammer, the Austrian opposition to the integration of nuclear energy in the EU-taxonomy has borne fruit, as the final conclusions of Thursday’s European Council summit do not make any reference to the controversial issue.

“We have won a battle today, but not yet the war on the usage of nuclear energy in the European Union,” Nehammer claimed in his press briefing after the summit.

Fifteen member-states – most notably France – are pushing for labelling nuclear power as a green energy source under the EU taxonomy rules. Austria, which banned the use of nuclear energy in the 70s’ is fiercely opposed to the initiative.

“Austria has made it clear that nuclear energy does not have a future,” Nehammer stressed.

“We managed to achieve a partial success in regard to not adding nuclear energy to the taxonomy,” he added.

The topic of nuclear energy has proven to be the most divisive topic at the council meeting and has been the reason why the negotiations “have lasted so long,” Nehammer stated. The discussions were  “heated” and “emotional,” he added.

Austria is only one of three EU member-states – next to Luxembourg and Ireland – who firmly oppose the inclusion of nuclear energy in the taxonomy.

Germany, which is phasing out nuclear power by 2022, has taken a more conciliatory approach. “People are overestimating the importance of this question,” Scholz said after the European Council meeting. He added that, “we should not exaggerate the importance of that topic” as it is mainly about finance and will not interfere with the individual path of the various EU countries to become carbon neutral.

The European Commission is currently assessing whether to include nuclear power into the bloc’s sustainable finance taxonomy – a set of rules to provide investors with a standard definition of what is labelled as a ‘green’ and sustainable energy source.

Austrian climate minister Leonore Gewessler told EURACTIV in November that Austria would sue the Commission if the EU decides to include nuclear in the bloc’s taxonomy.