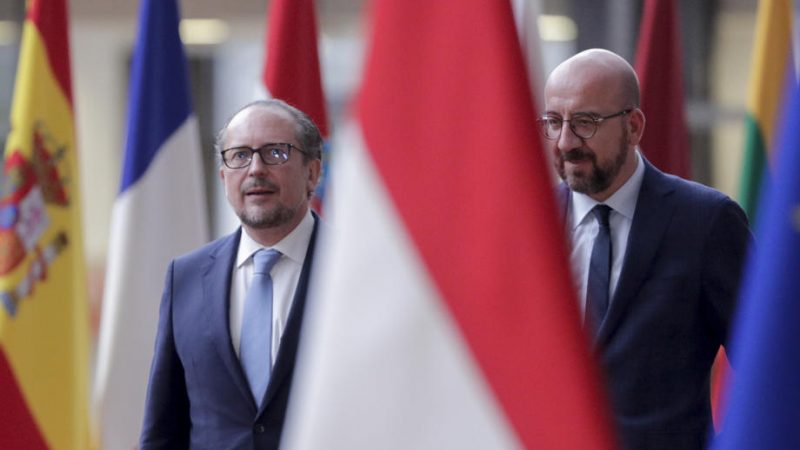 “Austria’s most important goal is that there won’t be any divides in Europe again,” said Schallenberg. [EPA-EFE / OLIVIER HOSLET]

Schallenberg, who worked in Brussels and studied at the College of Europe, referred to his trip to Brussels as a “homecoming” and emphasised that it was a “deliberate signal” to show that Austria wants to collaborate closely with the EU to tackle the challenges ahead.

He also emphasised that he wants to continue the course of his predecessor, Sebastian Kurz, who was forced to resign after being linked to a corruption scandal.

One of his core concerns is to bring the Western Balkans closer to the EU to facilitate their accession to the bloc.

“Austria’s most important goal is that there won’t be any divides in Europe again,” said Schallenberg, adding that EU enlargement in the Western Balkans is “a matter of the heart” to him.

In a similar vein, he said that he does not want to give Eastern European countries the impression that they are second rank member states.

However, he also heavily condemned the recent developments in Poland, where the supreme court has questioned the supremacy of EU law. Schallenberg referred to last week’s ruling by Poland’s Constitutional Tribunal as “highly dangerous”.

“I think that the approach towards Poland is absolutely right. However, things depend on how we communicate with each other,” he stressed.

Schallenberg also stressed that he would continue the fiscally conservative course of the former Chancellor and Austria’s tough stance on migration.