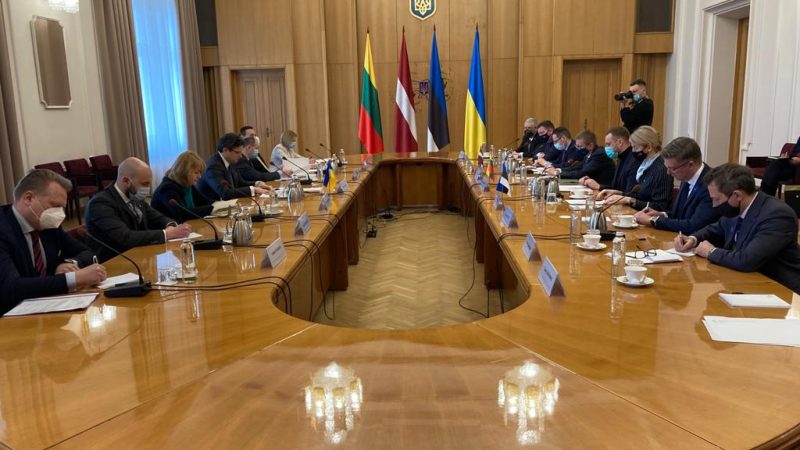 Foreign ministers of Estonia, Latvia, and Lithuania visited Kyiv on Tuesday to show solidarity amid the Russian military build-up around Ukraine’s borders.

“Red lines” should be drawn, the Baltic ministers said, as they stressed that the EU should be prepared to impose further sanctions on Russia due to its aggressive actions in the region.

However, some member states are increasingly voicing concerns over the anticipatory stance of the EU’s policy and whether Brussels is ready to keep their diplomatic promises if the situation escalates further.

The last-ditch visit came just a few days before EU foreign ministers are set to discuss the escalating tensions between Russia and Ukraine.

Speaking alongside his colleagues in Kyiv, Lithuanian Foreign Minister Gabrielius Landsbergis said that “the main Baltic message […] is that Ukraine will never stand alone and this should be clearly understood” against the background of Russia’s aggravated security situation.

They also stressed the consequences for Russia if it crosses the “red lines”.

“The Russian Federation that has to stop its activities, move away troops, de-escalate the situation and get back [on to the] political track and negotiations […] in Minsk and in the Normandy format,” Landsbergis said, adding that “if the red lines are crossed, that means the political options are less viable […] and then the consequences will follow.”

“The red line of Ukraine is the state border. If Russia crosses the red line, then it will have to suffer,” Ukrainian Foreign Minister Dmytro Kuleba said.

In recent weeks, Russia has built up a large number of troops around Ukraine’s borders. Kyiv, the EU and NATO have condemned the move.

“Recently NATO has already been very vocal about Russia’s power games in Ukraine. Will EU27 foreign ministers go beyond ‘deep concern’ at their meeting on Monday?”, a senior EU diplomat told EURACTIV.

“Hopefully, it is not a rhetorical question,” he added.

Ukrainian President Volodymyr Zelensky is expected to travel to Paris on Friday to discuss the rising tensions with French President Emmanuel Macron. The two leaders will be joined by German Chancellor Angela Merkel by video link, Macron’s office said.