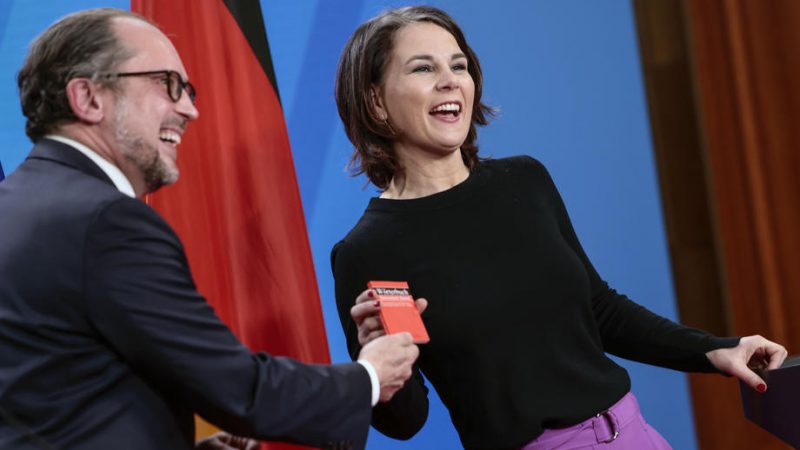 German Foreign Minister Annalena Baerbock, right, receives an Austrian-German dictionary from her counterpart from Austria Alexander Schallenberg before a meeting at the Foreign Ministry in Berlin, Germany, 16 February 2022. [EPA-EFE/Hannibal Hanschke]

The EU needs to coordinate its approach during the ongoing Ukraine crisis and provide a European perspective to the Western Balkans, said German Foreign Minister Annalena Baerbock and her Austrian counterpart, Alexander Schallenberg.

“We stand for an open, serious dialogue with Moscow that has always been the policy of our countries,” explained Schallenberg,  alongside Baerbock in Berlin on Wednesday.

Much like Germany, Austria is particularly wary of escalating tensions between Ukraine and Russia, as it is also heavily reliant on importing Russian gas.

“The only way out of this situation, which continues to be highly dangerous, is through dialogue and trust-building,” noted Baerbock.

“It is precisely at such critical moments that we need the OSCE mission to create transparency and prevent dangerous misunderstandings,” she added.

“It takes two to tango,” said Schallenberg, adding that it was “almost crazy” that foreign ministers had to emphasise that every opportunity to avoid war had to be taken.

The two countries also agreed on looking towards the Western Balkans, “Europe’s courtyard,” where Schallenberg noted a shared duty of Austria and Germany to keep the region in mind.

The two countries are “calling for extra speed in foreign policy,” also concerning the “urgent need for a European perspective for the Western Balkans,” Baerbock explained.

Despite the accession of the Western Balkans being a priority for Austria and Germany, talks have stalled in recent years. Concerns over rule of law and corruption, while still present, have made way for a Bulgarian veto impacting Albania and North Macedonia and a general stagnation of progress with hopefuls such as Bosnia and Herzegovina and Montengero.