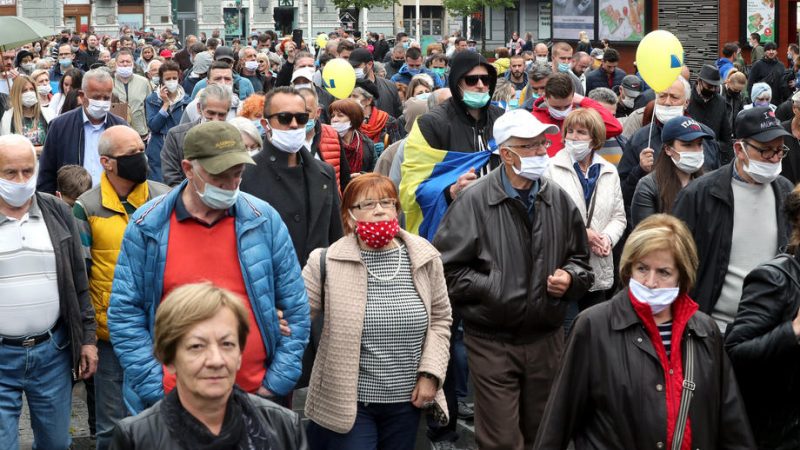 But protesters in Dublin, which is home to the European headquarters of many big tech companies, appealed for stricter action, including the global take-down of content and accounts altogether. [EPA-EFE/FEHIM DEMIR]

Bosnian and Herzegovinians in the UK, Italy, Sweden, Belgium and 14 other countries organised protests in favour of preserving peace and stability in BiH, urging the EU to react against those questioning the country’s survival, N1 reported.

A large number of people rallied outside the Office of the High Representative in Sarajevo, blocking traffic and demanding the international community take more resolute action.

High Representative Christian Schmidt told the gathered that difficult times had come for BiH, calling on citizens to keep the peace and thus participate in stabilising the situation.

Schmidt invited their representatives for talks, but they refused. He then came outside and told them he understood their concern about the political crisis in the country and the constantly increasing tensions.

The Restart NGO organised the protest as part of a project they call Citizens Awakening. They also called on BiH citizens living in the West to organise protests.

BiH Foreign Minister Bisera Turković sent protest notes to the embassies of the Russian Federation, the People’s Republic of China and the Republic of Serbia due to the presence of embassy representatives at the events held on 9 January, in connection with the unconstitutional celebration of the Day of Republika Srpska entity.

Croatian MP and president of the Independent Democratic Serb Party, Milorad Pupovac, also attended the protests. His party said Pupovac was there for two reasons, none of them political. Not only do tens of thousands of Serbs who fled Croatia live in the Serb entity of Republika Srpska (RS), RS institutions also provided significant humanitarian aid after the earthquake in Banovina, part of Croatia.