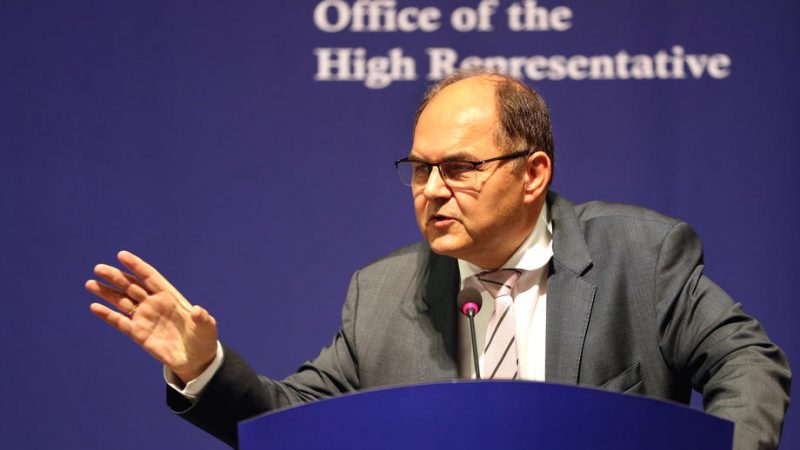 “The Republika Srpska Army will not be formed,” High Representative for Bosnia and Herzegovina Christian Schmidt has said. [EPA-EFE / FEHIM DEMIR]

“The Republika Srpska Army will not be formed,” High Representative for Bosnia and Herzegovina Christian Schmidt said in an interview with the Voice of America. Republika Srpska (RS) is Serb entity in BiH.

During talks with Schmidt, US National Security Advisor Jake Sullivan underscored the US’s strong support for the High Representative, his office, and its mandate to oversee civilian implementation of the Dayton Peace Accords. They also agreed on the need to counter corruption and support civil society.

Schmidt said that his interlocutors in both Washington and Brussels told him that the international community, including NATO, would not watch calmly as Milorad Dodik, Serb member of the tripartite BiH Presidency, questioned the survival of the BiH armed forces and simultaneously tried to form the RS army.

“It should be clear that if things get complicated, the European Union, EUFOR and NATO, through the so-called ‘Berlin Plus’ mechanism, can increase their presence (in BiH). I don’t see the need for that at the moment, but I think we have to be aware of the situation”, Schmidt said.

“The Dayton construction has very sophisticated checks and balances. And the idea was that these checks and balances would guarantee the influence of the three peoples and the two entities, and then they could work together. Now we see that controls and balances are leading to a blockade”, is how the High Representative defined one of the biggest obstacles in the functioning of the BiH.

The Dutch parliament adopted a resolution asking the country’s authorities to push the EU for sanctions aimed at Milorad Dodik for denying the genocide in Srebrenica, Anadolu Agency reported.