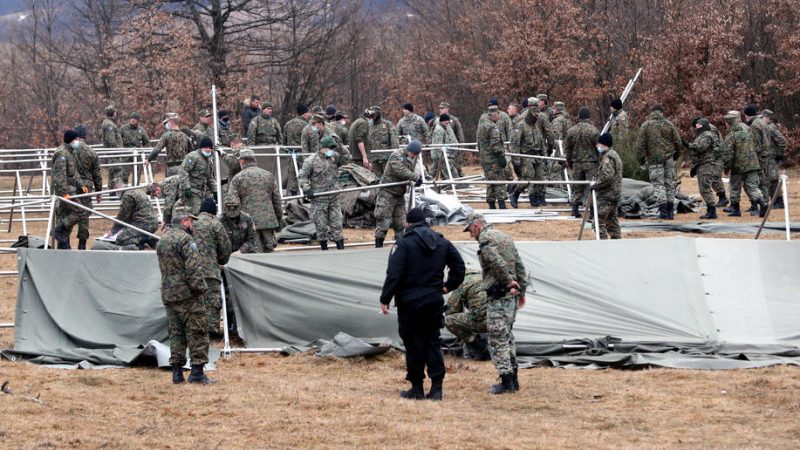 Bosnian soldiers set up new tents for migrants at the Lipa camp in Bihac, Bosnia and Herzegovina, 01 January 2021. [EPA-EFE/FEHIM DEMIR]

The German and Austrian ambassadors to BiH, Margret Uebber and Ulrike Hartmann, together with EU Delegation head in BiH, Johann Sattler, paid a visit to the Lipa migrant camp, near northwest city Bihać.

“First important goal achieved – 750 migrants/refugees are now placed in heated tents in Lipa,” Sattler tweeted from the camp, adding that the next step will include the protection for those in makeshift tents around Bihac, the administrative centre of the Una-Sana Canton, Bosnia’s northwestern part most affected by the migrant crisis.

However, during talks with Sattler on Wednesday, Bihać Mayor Šuhret Fazlić said he was opposed to illegal migrants being placed in the Bira camp in that town even though it has the best conditions and was completely built and equipped with EU funds.

“For three years Bihać has been part of the solution to the problems with the migrant crisis and we are prepared to actively participate in caring for migrants who do not have adequate shelter. However, Bira can in no circumstances be used as a migrant camp,” Fazlić announced in a press release.

The Bira camp is located in the very centre of Bihać and the majority of residents demanded that the migrants be resettled and that the camp be closed down. The Serb member of BiH Presidency, Milorad Dodik, expressed his opposition to placing migrants in the Republika Srpska entity. (Željko Trkanjec | EURACTIV.hr)