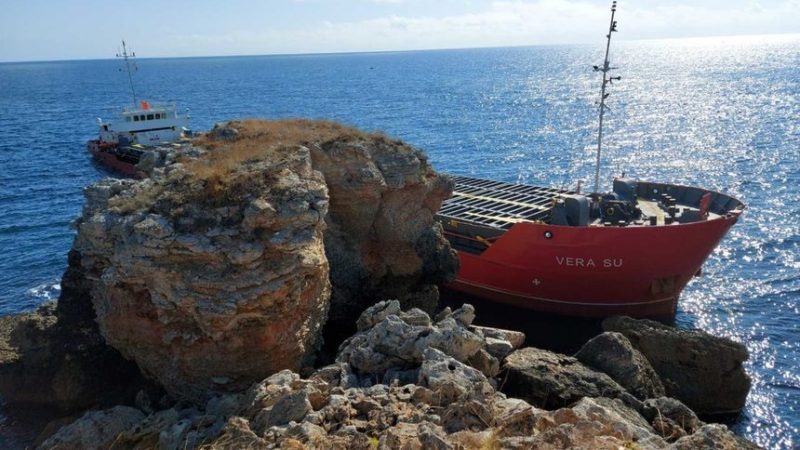 For six days after the accident, the Bulgarian authorities did not take any action to save the ship, although the weather was right for a rescue operation. [Photo by Dnevnik]

The cargo ship Vera Su, which flies the Panamanian flag and has a Turkish crew, crashed and ran aground on the high rocky Bulgarian coast a few kilometres from the Kaliakra Nature Reserve on 20 September. If Bulgarian authorities fail to transfer the cargo to land, the more than 3,000 tons of urea on board could threaten to turn this part of the Black Sea – one of Europe’s most important natural habitats – into a dead zone.

Urea is used as fertiliser in agriculture, but once it comes into contact with seawater, it causes a rapid flowering of phytoplankton, which emit toxins for marine life. Experts have warned that this would destroy the rich marine habitats of dolphins, Black Sea sharks, other marine species, and the birds in this part of the protected Pontic steppes.

For six days after the accident, the Bulgarian authorities did not take any action to save the ship, although the weather was right for a rescue operation.

Eight days after the crash, authorities sent rescue vessels with unsuitable equipment for unloading urea, which began to spill into the sea. The operation was terminated by order of the environment minister.

The impasse with the stranded ship Vera Su and the subsequent pollution of the sea led to the dismissal of the head of the Bulgarian Maritime Administration, Zhivko Petrov.

“I have identified a serious inadequacy on the part of the agency,” Transport Minister Hristo Alexiev said.

The day before, Zhivko Petrov announced that he did not know urea would leak when the ship was unloaded and claimed that “this load was not so poisonous”.

The government has set up a crisis headquarters to work in a coordinated manner to retrieve the shipwreck. After missing the chance in the first few days, the weather conditions in the area are now poor as big waves are pushing the ship onto the rocks.

Authorities remain ready to evacuate the nine-member crew. The Navy hopes to secure the shop with large anchors to prevent it from being destroyed in the bad weather. A new attempt will then be made to unload and retrieve it.