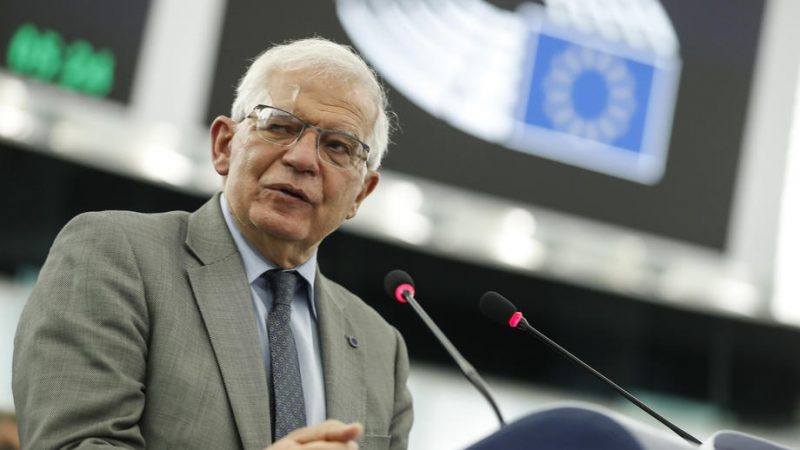 The EU’s executive on Wednesday will publish a new report on Russia after consultations with US President Joe Biden, who will be meeting his Russian counterpart, Vladimir Putin, in Geneva on the same day. [EPA-EFE/Jean-Francois Badias]

The EU‘s new strategy for its fraught relationship with Russia will be based on pushing back, constraining and simultaneously engaging with Moscow, the bloc’s top diplomat Josep Borrell said ahead of the presentation of a Russia report on Wednesday (16 June).

The EU’s executive is set to publish the report after consultations with US President Joe Biden, who will be meeting his Russian counterpart, Vladimir Putin, in Geneva on the same day.

In May, EU leaders had tasked the EU’s chief diplomat with preparing a report on the bloc’s strategy towards Russia, similar to the one presented in March on Turkey, which included a positive and negative agenda and spelt out in more detail potential steps towards Ankara if ties were to worsen, including sanctions.

The report was intended to buy time until the EU summit on 24-25 June, when a comprehensive approach towards Moscow could be presented, also because leaders say it will be difficult to agree on a joint position between the EU27.

“We have to push back, we have to constrain, and we have to engage at the same time,” Borrell told a panel in previewing the new strategy on Tuesday, which will be discussed by EU leaders at the summit.

He said EU ties with Russia were “at the lowest level”.

“It’s going to be difficult to improve them […] the prospects are not bright that things are going to improve anytime soon,” he said.

In an echo of Biden’s own remarks ahead of his first face-to-face talk with Putin since becoming US president, Borrell said the EU would at the same time be ready to improve ties with Russia should the Kremlin change its tack.

EU diplomats said three further principles are expected to be added to the existing five governing EU policy towards Russia. These include full implementation of the Minsk agreements on Ukraine, closer ties with Russia’s former Soviet neighbours, strengthening EU resilience to Russian threats, selective engagement with Russia on certain issues such as counter-terrorism, and support for people-to-people contacts.

The three new principles “will include resistance to breaking the law, limiting the possibilities of weakening the Union and offering cooperation in those areas, where it is possible,” a diplomat told EURACTIV on condition of anonymity. (Alexandra Brzozowski, EURACTIV.com)