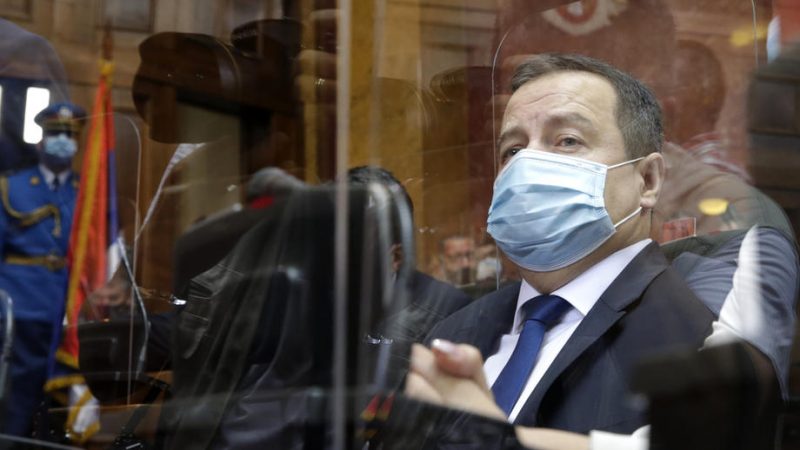 A photographer is reflected in the protective barrier while taking a photo of deputy Ivica Dacic in Belgrade, Serbia, 03 August 2020. [EPA-EFE/ANDREJ CUKIC]

Serbian Foreign Minister Ivica Dačić during a virtual-session of the UN Security Council on Wednesday accused Priština of not having implemented the Brussels Agreement from seven years ago due to its refusal to form the Community of Serb Municipalities. At the same time, global powers spoke out against the continuation of the UN Mission to Kosovo.

“Serbia has been asking the EU one question for years now – can one describe as an agreement something that the two sides agree upon and sign, and then one of them says that it will not implement what has been agreed?” Serbia’s foreign minister asked.

“What would happen if Serbia were to decide not to fulfill its obligations? Would you have the patience, understanding and excuses that you have been demonstrating towards the representatives of Priština for seven years now? Despite all that, Serbia has patiently continued to advocate dialogue and the implementation of agreements, in the hope that others will realise the damage that such unacceptable behaviour by Priština is inflicting on the entire process,” said Dačić.

Dačić added that Belgrade was encouraged by the fact that, last week, during a visit to Priština, EU special envoy for the Belgrade-Pristina dialogue, Miroslav Lajčak, “insisted on the full implementation of the reached agreements.”

At the session, UNMIK (UN Mission in Kosovo) chief Zahir Tanin commended Belgrade and Priština for resuming the negotiation process and urged them to commit to a constructive dialogue process, despite the challenges and differing views.

Tanin said that the recent meetings of representatives of Belgrade and Priština in Brussels and Washington “show potential for progress in further solving difficult issues, when international resources are joined with the leadership in the field.”

At the same time, the US and UK spoke out against the continuation of UNMIK.

“The important progress mentioned here today underscores that UNMIK’s role in Kosovo and the region as a peacekeeping mission has long since outlived its original purpose,” said US Ambassador Cherith Norman Chalet during the UN Security Council briefing. The UK held the same position.

“Moscow considers UNMIK a key international mission in Kosovo. We see Priština’s attempts to push the UN mission out of Kosovo, we see attempts to form a Kosovo army. All this is contrary to Resolution 1244 and undermines the stability of the region,” said Russian Ambassador to the UN, Vasily Alekseevich Nebenzya, adding that Kosovo remains “fertile ground for the recruitment of terrorists”.