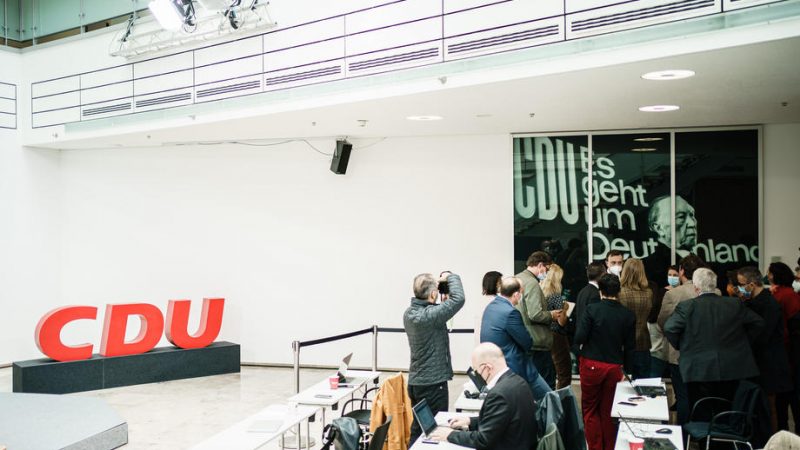 Breaking with tradition, for the first time all party members will be allowed to have a say in electing a new party leader. [EPA-EFE / CLEMENS BILAN]

The Conservative CDU party’s waning hopes of staying in power has led them to refocus on internal reorganisation. Breaking with tradition, for the first time all party members will be allowed to have a say in electing a new party leader.

Current party leader Armin Laschet had signalled he would step down from the role after his German conservative union of CDU/CSU hit a historic low following the September election.

“Representative democracy is the best way of bringing about political decisions,” Laschet said in Berlin, as he announced that the Conservatives would consult their party membership on who should lead the party, now heading into opposition for the first time in more than 16 years.

Laschet described the new process as a ‘compromise’ between the wish to open up crucial party decisions to more members and the need to unify quickly behind a new party leader.

Starting 15 November, letters will go out to CDU party members, who will get to vote in early December on their new party leadership.

In case the December vote presents no clear majority, a second round of voting would be held, with the results announced on 14 January 2022. A party convention from 21-22 January would then confirm the results.

The candidates given the best chances for leadership are neo-liberal Friedrich Merz and Norbert Röttgen, former environmental minister and chair of the foreign affairs committee in the Bundestag. Both were defeated by Laschet in early 2021 when the party chose Merkel’s successor.

Other names in the run include Ralph Brinkhaus, leader of the CDU’s parliamentary group, and Carsten Linnemann, leader of the party’s pro-business wing. Outgoing Health Minister Jens Spahn, a more right-leaning politician, might also have chances.