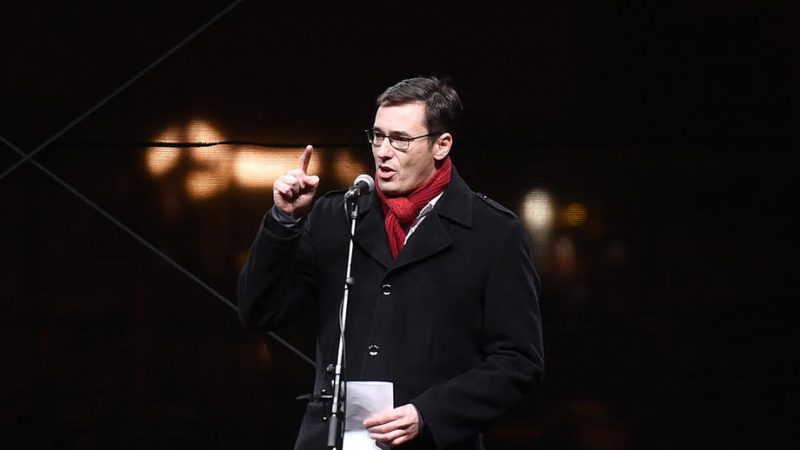 “We have one life and one country,” said Karácsony, speaking in his hometown of Nyírtass, putting the unification of the country as his goal. [EPA-EFE/Zoltan Mathe]

The Hungarian capital’s mayor Gergely Karácsony has confirmed his widely expected candidacy for the pre-election of opposition parties for the prime ministerial post.

“We have one life and one country,” said Karácsony, speaking in his hometown of Nyírtass, putting the unification of the country as his goal.

According to the candidate favoured by the polls, “perhaps the biggest of many troubles is that we feel Hungary to be less and less our common homeland, that Hungary is one and indivisible; we increasingly feel that our country is divided to the extreme”.

All of Hungary’s six biggest oppositions parties – centre-left’s MSZP and Demokratikus Koalíció, the green LMP and Párbeszéd, the liberal Momentum and far-right-turned-conservative Jobbik – have previously agreed to put forward only one candidate against Fidesz in all 106 electoral districts, a joint prime ministerial candidate, a common electoral programme and a common list.

Fidesz Prime Minister Viktor Orbán has won three consecutive landslides in national elections since 2010 and has since changed electoral laws and introduced a new constitution, which his party has since amended nine times.

The opposition already partially applied the joint-running strategy at the municipal elections in October 2019 and scored its biggest victory in a decade, when the joint Green nominee Karácsony ousted Fidesz incumbent István Tarlós as mayor of Budapest, while opposition parties made gains in other major cities as well.

The joint prime ministerial candidate of the six parties will be selected in two rounds, in which voters will be able to participate online, with the three candidates receiving the most votes moving on to the second round.

The first round of primaries will take place on 18-26 September, the second between 4 and 10 October. (Vlagyiszlav Makszimov | EURACTIV.com with Telex)