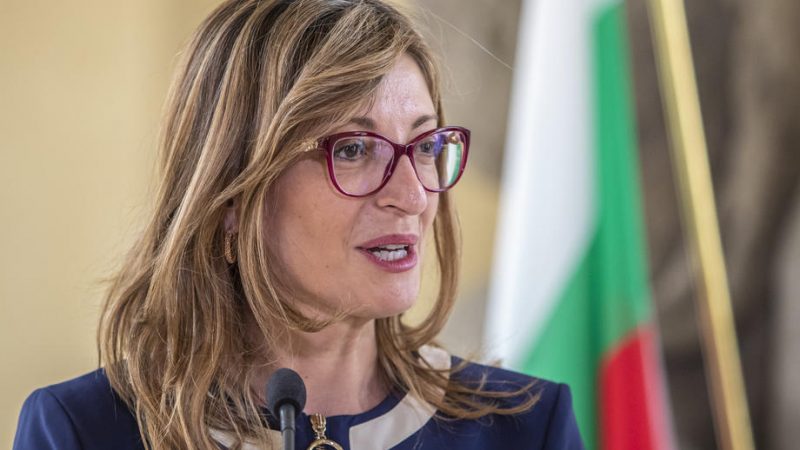 “We believe that Albania has fulfilled most of the conditions. At the moment, Bulgaria can’t approve the negotiating framework with Northern Macedonia”, said Foreign Minister Ekaterina Zaharieva. [EPA-EFE/MARTIN DIVISEK]

The Bulgarian government has officially announced its veto on the start of EU membership talks with Northern Macedonia but has approved the start of the EU negotiation process with Albania.

“We believe that Albania has fulfilled most of the conditions. At the moment, Bulgaria can’t approve the negotiating framework with Northern Macedonia,” said Foreign Minister Ekaterina Zaharieva.

“We insisted on three conditions – the language formula from 1999, a roadmap for the implementation of the Good Neighbourhood Agreement and guarantees that Northern Macedonia will not maintain its claims to the existence of a Macedonian minority in Bulgaria,” Zaharieva added.

Bulgaria insists that the language formula must be “the official language of Northern Macedonia” and not “Macedonian language” because it claims that Macedonian is a dialect of Bulgarian.

“We are open to negotiations, but there must be a desire for compromise on both sides,” the country’s foreign minister went on to say. Zaharieva explained that Bulgaria has made great efforts to bring back the enlargement issue to the EU agenda in support of Western Balkan countries during its EU Council Presidency run.

“The Bulgarian government is open to negotiations. More efforts must be made in the negotiations than in the defamation campaigns against Bulgaria in Skopje. I have personally seen three such campaigns since I became a minister. Achieving good neighbourliness is in the interest of the citizens of the candidate country. This is a civilizational choice and not because you want something from a neighbouring country. The good neighbourhood principle should be applied in practice, and not just to adopt and approve some legal texts, “said the Bulgarian foreign minister.

Deputy Prime Minister and Defence Minister Krassimir Karakachanov was the first to speak about the possible veto in early September. His nationalist party, IMRO, is actively using the issue of raising support ahead of the next parliamentary elections that are set for March.

“Even today we see that despite Bulgaria’s efforts, the Skopje elite lives in a world of its own, invented in Belgrade, in order to instil hatred towards Bulgarians and Bulgaria,” Karakachanov told Bulgarian National Radio on Tuesday.

According to him, Bulgaria says “no” to hate speech and attempts to “steal, falsify and manipulate Bulgarian history” and not to Macedonian citizens.