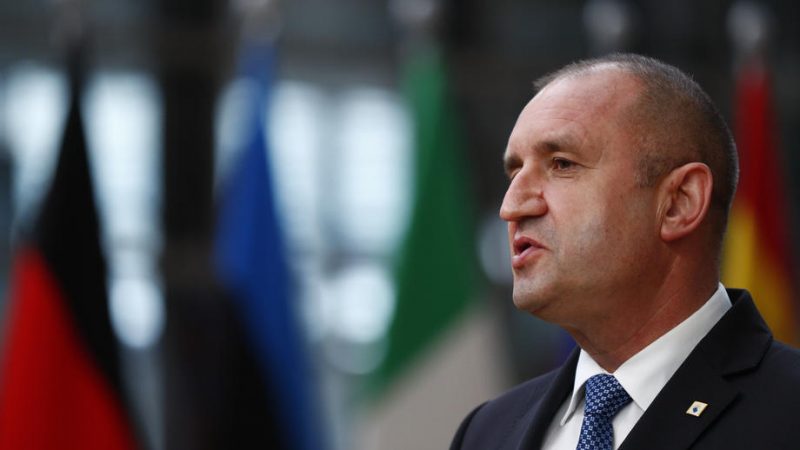 According to the president, Bulgaria should be able to make a realistic assessment of the possibilities for lifting the veto on Skopje. [EPA-EFE/JOHANNA GERON]

Bulgaria expects North Macedonia to offer a “roadmap” to resume talks regarding EU accession and find a solution to the issues between the two countries, Bulgarian President Rumen Radev explained after the meeting of EU leaders in Brussels on Tuesday.

According to the president, Bulgaria should be able to make a realistic assessment of the possibilities for lifting the veto on Skopje.

“Bulgaria is the best friend of North Macedonia and no one wants its European perspective more than us. The North Macedonian leaders should be encouraged to seek dialogue with Bulgaria. Yes, the support of the European partners is important, but the most important is the support of Bulgaria. We want a sustainable irreversible process,” Radev said.

Bulgaria turned out to be the only EU member to block the start of the pre-accession process of North Macedonia and Albania. However, while authorities in Sofia are under strong European pressure to lift the veto, nothing has happened so far.

“Expectations are focused on Bulgaria, I will not say pressure. The European Council is expected to move forward on the European path of North Macedonia in the second half of June. I have expressed the Bulgarian position very clearly. Bulgaria is the strongest supporter of the European perspective of North Macedonia and Albania. The road to its achievement passes mostly through Sofia,” the president said. (Krassen Nikolov | EURACTIV.bg)