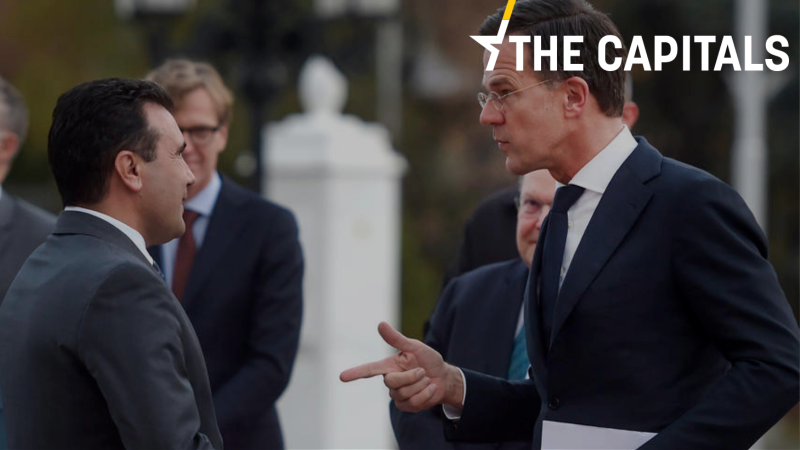 The outcome of Bulgaria’s upcoming general elections will impact the pace of Albania and North Macedonia’s EU accession path, Dutch Prime Minister Mark Rutte said during a visit to the region. [EPA-EFE/NAKE BATEV]

The outcome of Bulgaria’s upcoming general elections will impact the pace of Albania and North Macedonia’s EU accession path, Dutch Prime Minister Mark Rutte said during a visit to the region.

During a visit to Albania on Wednesday 10 November, Rutte met with Prime Minister Edi Rama. Topics on the table included the accession of Albania to the EU, which is tied to that of its neighbour North Macedonia. A veto from Bulgaria over cultural and ethnic issues means Albania’s path has been stalled.

“In order for Albania to hold its first First Intergovernmental Conference, it is essential that the issues between Bulgaria and Northern Macedonia be resolved. I hope this happens. You have done a lot. To be fair, [Albania] has made the right amount of progress,” Rutte said.

In June 2021, the General Affairs Council of the EU failed to agree on starting accession talks with the two countries. Requiring a unanimous decision by the foreign ministers of all 27 states, the veto by Bulgaria made it impossible. Bulgarian President Rumen Radev has set three conditions that North Macedonia must fulfil before they lift the veto.

Georgi Kiryakov commented to EURACTIV that the chance of forming a stable government in Sofia is very small. “Bulgaria is heading for a fourth parliamentary election early next year,” Kiryakov said.

He explained that ff Bulgaria fails to elect a stable government, it will not be able to give the green light for the EU integration process of Northern Macedonia and Albania.

The election appears likely to be won by former Prime Minister Boyko Borissov’s GERB party, but it is unlikely to get more than 25% of the votes. Borissov is currently in political isolation, and there seems to be no chance of him returning to power soon.

The alternative to new elections is a weak government-backed by four parties. Such a government would find it difficult to decide to give the green light to Skopje because the decision would be very unpopular.

Meanwhile, in North Macedonia, Prime Minister Zoran Zaev rescinded his pledge to resign, citing the need for stability and democracy in the country.

The decision came after opposition party VMRO-DPNE announced a no-confidence vote on Thursday (11 November), adding that they expected to win with 61 votes out of a 120 seat parliament.