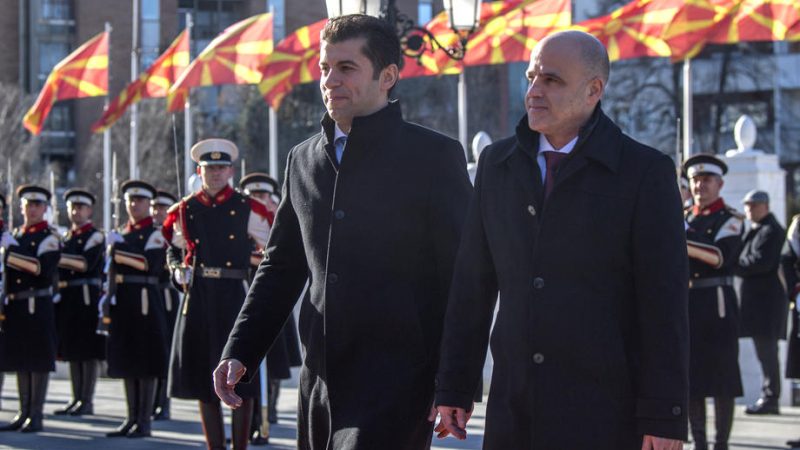 The first meeting between Bulgarian Prime Minister Kiril Petkov and his North Macedonian counterpart Dimitar Kovacevski concluded amicably as the two leaders announced their commitment to opening a new chapter while sidestepping concrete answers to thornier questions on history and identity.

Petkov was in Skopje on Tuesday to meet with Kovacevski, a former deputy finance minister who recently succeeded Zoran Zaev as leader of the ruling Social Democrats (SDSM) and Prime Minister of North Macedonia.

As a sign of political goodwill, Bulgaria will begin to use the abbreviated name of North Macedonia. It will not block the use of this denomination in international processes and organisations.

North Macedonia has informed the United Nations that the use of this name does not implicate the territorial integrity of Bulgaria.

The use of the short name North Macedonia has been open since the country accepted Greek demands to change the country’s name. “Removing this issue is a big step and gives optimism for the future,” said Macedonian Prime Minister Kovachevski.

The meeting between the two leaders focused on establishing five working groups on infrastructure, economics, EU integration, culture and history.

According to Petkov, the working groups would meet every week, “with clear goals, with clear results, and not only political statements.”

Petkov also announced that a direct airline between Skopje and Sofia would be established in the next sixty days. Next Tuesday (25 January), the two governments will meet to discuss the matter.

The two leaders agreed to work on their differences concerning the cultural and historical issues that motivate the Bulgarian veto against North Macedonia on matters of European integration.

Referring to the joint historical commission set up for this purpose, Kovacevski said it has its own work plan and “historians are working on a longer process.”

On the other hand, Petkov reiterated that Bulgaria recognises the existence of a modern Macedonian identity and the language. However, the two countries’ issue hinges on the fact that Bulgaria insists that until 1944 North Macedonia and Bulgaria had a common history.

Meanwhile, North Macedonia recognises the existence of Albanians, Turks, Vlachs, Roma, Serbs and Bosniaks as minorities, but not Bulgarians, despite the fact that 110,000 North Macedonian citizens have obtained Bulgarian passports. Bulgaria insists that the country changes its constitution to include the Bulgarian minority as well.

Petkov said that the agreement reached should not be underestimated. “They (the Macedonians) say they have no territorial claims (to Bulgaria). It was really a handshake (for partnership). For the first time, a positive step was made, which has not happened in the last two years, and we, for a few days, we achieved it together, “Petkov added.

The Bulgarian prime minister was cautious and did not give a specific deadline within which Bulgaria could approve Northern Macedonia’s EU negotiating framework. In December, he had announced that problems could be solved within six months.

While the meeting ended on a positive note that stressed the importance of concrete solutions, it implies that the new Bulgarian government has not changed its stance on its veto on North Macedonia, spelling trouble for its EU aspirations along with Albania’s.