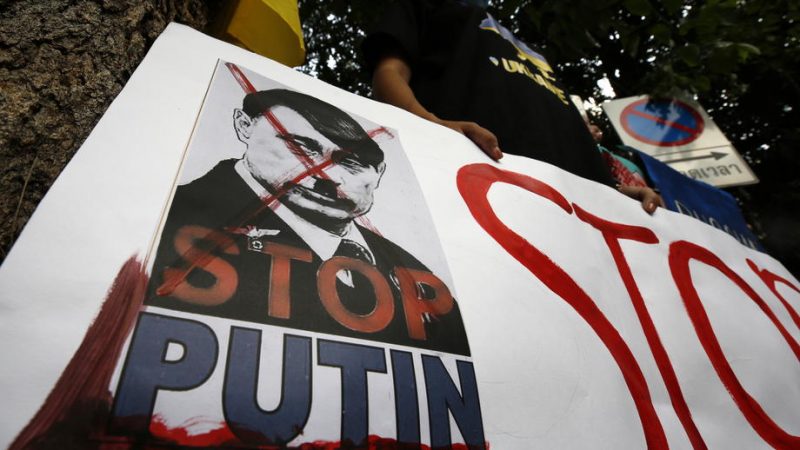 A group of Europe's political leaders warn that President Putin and his accomplices face indictment at the International Criminal Court. [EPA-EFE/NARONG SANGNAK]

Bulgaria is traditionally one of the most pro-Russian countries in Europe. From 2020 to 2022, between 55% and 58% of Bulgarians expressed positive assessments of Putin.

However, the war in Ukraine has radically changed approval for Putin in Bulgaria as positive ratings for the Russian strongman have almost halved to 32%, while negative ratings have more than doubled, according to the study commissioned by the state Bulgarian National Television.

The war in Ukraine with its victims, suffering, destruction, and the future of Europe at stake has dramatically altered public opinion in the country. The Russian invasion, the loss of lives on both sides, and Russia’s threat of using nuclear weapons are among the factors for this shift in attitude.

Over 75% of the Bulgarians surveyed see Russia’s invasion of Ukraine as unjustified. Ukraine President Volodymyr Zelenskiy, who was completely unknown to Bulgarians until recently, was approved by 40%, and 29% had a negative opinion of him. This is despite pro-Russian propaganda on social networks.

Despite propaganda and fake news, the EU’s unprecedented and unified move in imposing sanctions on Russia is seen as the right policy by 63% of Bulgarian citizens, with 32% opposed.

The crisis in Ukraine has led to the dismissal of Defence Minister Stefan Yanev, who in the early days of the conflict refused to call it “war” and used Russian President Vladimir Putin’s terminology. 55% of Bulgarians approve of the change of minister, while 36% do not.

The most surprising result of the survey is that most people in the poorest EU country are willing to pay the price of sanctions. 47% of Bulgarians declare their readiness to share the cost of the imposed economic sanctions. People are well aware of the severe human, moral, economic and social consequences of the devastating war, which will be felt more and more in the coming months, explains Alpha Research.

However, the survey shows that 36%, primarily people with less financial resources, are reluctant or could not pay higher prices.

“The concern of business and citizens about the forthcoming economic difficulties is understandable, but in the face of the daily loss of life and the risk of a nuclear catastrophe, the understanding and hope of the majority of Bulgarians are that the only way out is solidarity and resolute opposition to the war. If it is not stopped, there may be much more monstrous consequences than those we are currently suffering,” Alpha’s analysis states.