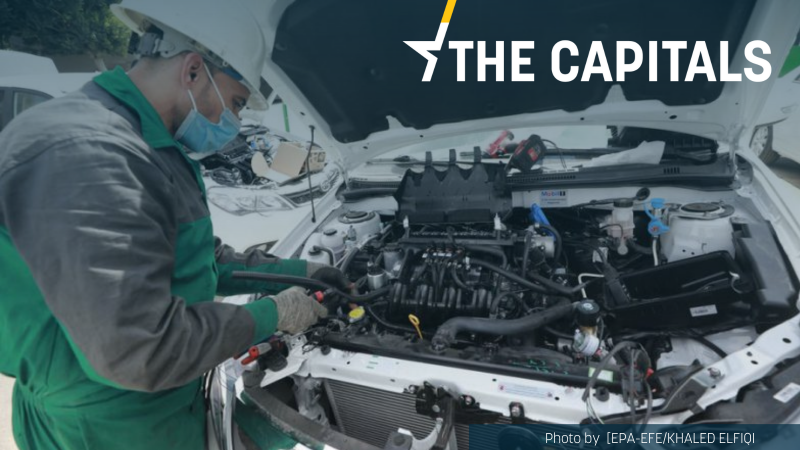 Kremlin’s war on Ukraine is dealing another blow to Europe’s car manufacturers, already reeling from the pandemic and the global chip shortage.

Wire harnesses, about 5km of an organised set of wires, terminals and connectors that run throughout the entire vehicle and relay information and electric power are the main components coming from Ukraine.

With Ukraine representing the source country for 7%-11% of all imported wire harnesses into the EU, European car manufacturers already started looking for alternative sourcing before the war.

Yet, it is likely to take between three and six months before alternative sourcing coming from Northern Africa (Morocco and Tunisia) as well as the Western Balkans (Serbia and North Macedonia) is fully scaled up, the European Association of Automotive Suppliers (CLEPA) told EURACTIV.

Amid the ongoing chip shortage which CLEPA say will get worse, other concerns are just exacerbating the situation.

“If the conflict is not resolved in the near future, we can expect the chip shortage to only get worse. Supply of critical raw materials and rising energy prices will also have a huge impact”, CLEPA representatives said.

In Hungary, local media reports the Audi’s factory in Győr is expecting significant problems with the supply of spare parts.

Company representatives told EURACTIV they plan to hold a press conference on Thursday where “directors will provide further details on the current situation” but could not comment beforehand.

Suzuki’s plant in Esztergom has suspended car exports to Russia, a volume which accounts for roughly a tenth of its annual exports.

“We are trying to shift the affected orders to other markets to maintain our planned production volumes,” a spokesperson told EURACTIV.

They also said that while “still the global chip shortage is causing the main concerns”, whether Suzuki Hungary will be able to meet its shipping or other obligations will depend “on future parts supply situation” and it ”may be forced to reduce our production output” if they cannot get enough parts.

Meanwhile, Mercedes-Benz, which has a plant in Kecskemét, central Hungary, told EURACTIV that as a partial solution to safeguarding supply-chains, it said it would be “transferring production to other locations within the supplier network”.

It also said it was “adjusting” shift plans in Hungary but hoped the “high flexibility of the plants will also be used to avoid downtime as much as possible” and said the situation “is being reassessed on a daily basis.”

When asked if the brand, which recently launched its first electric automobile made fully in Hungary, was weary of lithium shortages important for batteries, afraid of failure on obligations and the industry’s resilience, a Mercedes-Benz spokesperson said: “please understand that we do not participate in speculation.”

In contrast, BMW, which hopes to finish its new e-car plant in Debrecen, Hungary, by 2025, said the conflict “[has] no consequences for the supply of this location.”

EURACTIV was not able to reach Opel Hungary.

The situation is not much better in neighbouring Slovakia.

Patrik Križanský from the Slovak electric vehicle association said, “Currently, basically all critical materials we need for the production of batteries are breaking records in terms of price. Lithium is up 100% in comparison with January, same with cobalt or nickel. Nickel is mostly imported from Russia, it holds 10% of world reserves, and we must accept that any sanction will affect the imports and the price.”

In his view, however, this will not be enough to affect the long-term trends of vehicle electrification.

This website could not reach KIA or Stellantis, both with manufacturing plants in the country, but Volkswagen spokeswoman Lucia Kovarič Makayová said its plant in Slovakia might face “adjustment of production” as the brand has suppliers in Western Ukraine.

Peter Kremský, head of the Economy Committee of the National Council of the Slovak Republic said the war in Ukraine is bound to become a “big game-changer for the automotive industry”.

According to him, the combined effect of an increase in the price of commodities, decrease in investment and inflation could see some planned investments relocate elsewhere.

“Today, Europe has a problem to make any more sophisticated product without waiting for the supplies from outside of the union. It is a problem, and this is just another example,” said Pavol Prepiak, executive director of Slovak carmaker’s association.

“Europe must be able to be independent in this regard. We must relocate suppliers to more stable countries or to the union itself,” he added.

“It may take months to secure replacement supplies, till the companies find new importers or increase production capacity with other suppliers,” Bohuslav Čížek from the Confederation of Industry of the Czech Republic said.

In Czechia, where the automotive sector accounts for around 9% GDP, this is a serious risk for growth.

Roughly half of the Czech companies are directly affected by the Russian invasion of Ukraine, according to a survey organised by the Czech Association of the Automotive Industry (AutoSAP) among its members.

Further, more than a third of them are already experiencing shortages of raw materials, materials, or parts needed for production. More than a fifth has to deal with the logistical problems caused by the conflict.

Even Romania, which in 2002 exported more wiring harnesses than Ukraine, is experiencing problems elsewhere.

Dacia’s Powertrain and Chassis Plant in the country stopped production for several days as of Monday following a reduction in orders for gearboxes from Renault factories in Russia.

Rest of Europe under threat

However, the malaise has spread further West on the continent. The Renault factory in Cléon, France, went into short-time working due to a lack of components announced on Tuesday, which the unions attribute directly to the war in Ukraine.

As this factory produces motors, they expect to impact other factories in the country.

In Italy, Stellantis’s plant in Melfi (Potenza) announced on Tuesday (15 March) the production increase planned by the company is no longer possible after a meeting between the management and the unions. Work shifts will drop from 17 to 15 from 4 April, resulting in a provisional daily redundancy of 1,500 units.

Moreover, nearly 90% of all Spanish car industry “clusters” are already suffering a significant impact from the Ukraine war, according to a survey carried out among 137 Spanish companies in the automobile sector published last Wednesday (9 March), EURACTIV’s partner EFE reported.

Some have expressed great concerns that workers from Eastern European countries in Spanish car factories have decided to leave their jobs and join the fight to repel the Russian invasion.