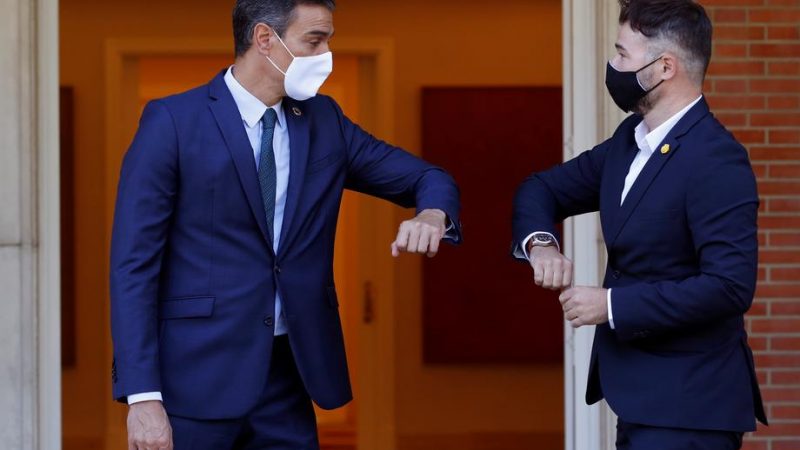 The announcement by ERC and the PNV provides certainty about the future stability of the coalition government of the socialist PSOE and left-wing Unidas-Podemos (United We Can). [EPA-EFE / J.J. Guillén]

Pro-independence parties, the Republican Left of Catalonia (Esquerra Republicana de Catalunya, ERC) and the Basque Nationalist Party (PNV) last week paved the way for the Spanish budget for 2022 to be approved after they announced they will not veto it.

The announcement by ERC and the PNV provides certainty about the future stability of the coalition government of the socialist PSOE and left-wing Unidas-Podemos (United We Can), after the latest “mini crisis” within Spain’s executive.

The political future of Prime Minister Pedro Sánchez and his government relies greatly on the parliamentary support by ERC and the PNV.

On Friday, both parties announced that they had no intention to submit amendments to the “Presupuestos Generales del Estado” (budget) for next year, unblocking the approval of the text likely to be this week, EURACTIV’s partner EFE reported.

Both pro-independence parties, and the main political formations in the opposition, such as centre-right Partido Popular (Popular Party), far-right Vox (the third force in parliament), and liberal Ciudadanos (Citizens), can submit “enmiendas” (partial amendments) and then delay, or in some cases, completely block approval, with the “enmiendas a la totalidad” (to the full text of the budget proposal).

Sources close to PSOE have expressed their “optimism” about approval and said negotiations with ERC and the PNV are moving “in the right direction”.

A social budget for 2022 to mitigate the crisis

The draft budget, with a record spending ceiling of €196.142 billion, allocates €27.6 billion extra for social spending, thanks to fresh resources drawn from the EU’s recovery fund.

Finance Minister, María Jesús Montero, said on 13 October that it is the “budget of a fair recovery”.

Stormy weather for the Spanish economy?

But the economic data does not paint a particularly rosy picture. Last week experts of the independent fiscal authority (AIReF) and the Spanish Central Bank (Banco de España) expressed serious doubts about the forecast of 7% GDP growth on which the executive had based its 2022 budget projection, a figure that the fiscal authority has lowered to 6.3%.

And the governor of the Bank of Spain, Pablo Hernández de Cos, announced last week “a significant downward revision” in December of its economic growth forecasts for this year, EFE had reported.

Hernández de Cos explained that the INE’s downgrade in the second quarter “entails, mechanically (…) a substantial reduction in the average GDP growth rate for 2021 and, to a lesser extent, also for 2022”.