Catholic, Muslim dignitaries call for tensions to be defused 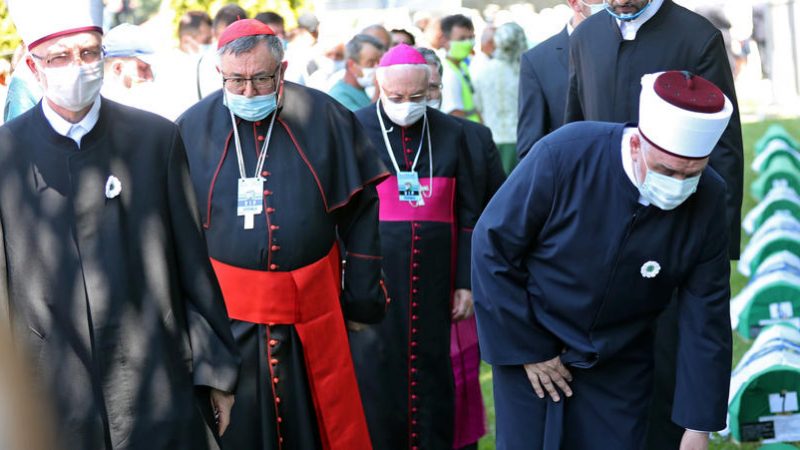 The two dignitaries described the relations between the Catholic Church and the Islamic Community as very good, expressing hopes that they would continue. [EPA-EFE / FEHIM DEMIR]

The highest Roman Catholic and Muslim dignitaries in BoiH, Sarajevo Archbishop Vinko Puljić and Grand Mufti Husein Kavazović, called for dialogue and defused tension in the country, warning that it threatened to escalate.

The current political and security situation in the country is complex and “is moving in a dangerous direction with an unforeseeable outcome,” the two dignitaries said.

Puljić and Kavazović called on domestic and international officials to engage in dialogue, noting that the tensions in the country contribute to the already high emigration of people of all ethnic and religious backgrounds.

They especially underlined the need to stop inflammatory rhetoric and start building an atmosphere of respect and reconciliation.

The two dignitaries described the relations between the Catholic Church and the Islamic Community as very good, expressing hopes that they would continue.

On Saturday, Patriarch Porfirije, the head of the Serbian Orthodox Church, arrived in Sarajevo, describing the capital of BiH as a beautiful and open city.

“There are few cities like Sarajevo, almost none in Europe,” Patriarch said, calling on the congregation to accept other people with an open heart and as friends.

Porfirije’s view on Sarajevo is wholly opposed to that of Serb member of the BiH Presidency Milorad Dodik, who calls Sarajevo a Muslim city and likens it to Tehran.

“That is not our city. We don’t have any aspirations regarding Sarajevo if only I did not have to go there,” Dodik said in an interview with the Russian news agency Sputnik in August.