China’s Cosco under fire after fatal accident in Piraeus port 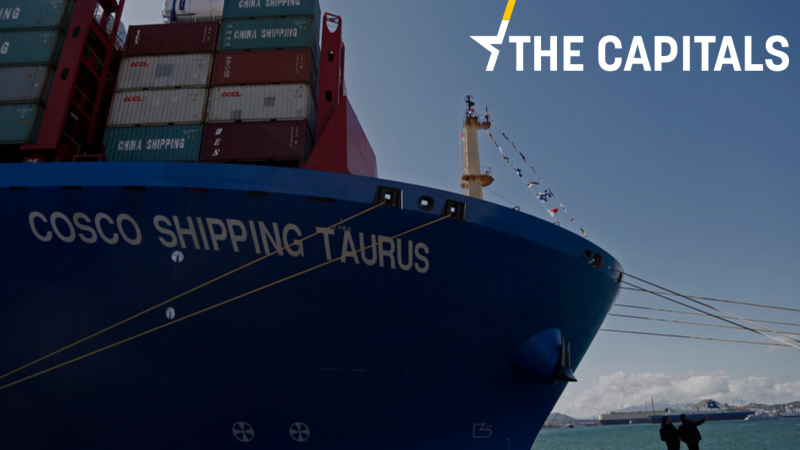 Following pressure by creditors for privatisations in terms of Greece’s bailout programme, 51% of Piraeus port was sold to Cosco in 2016. [EPA-EFE/YANNIS KOLESIDIS]

Cosco employees have gone on a 24-hour strike after an accident at a container pier in Piraeus port cost the life of a 45-year-old worker. The Chinese company now controls 67% of one of Europe’s largest ports, but several questions have arisen about working conditions and environmental credentials.

Angry port workers and the opposition have long complained about harsh working conditions that cause employees long-term fatigue and occupational diseases.

“Subcontracting and precarious employment relations allow employers to blackmail employees and, with the fear of dismissal, impose miserable conditions,” leftist Syriza party said in a statement.

Until August 2014, employees had no collective bargaining and used to be “rented” by contractors. Following a massive protest, a sectoral collective labour agreement was established as well as a union and a labour regulation that allowed the reporting of accidents.

However, EURACTIV Greece reported that employees remain on stand by and are called a few hours before the shift, depending on ships’ arrivals.

This means that sometimes they do double shifts with a break of only a few hours and then return, tired to a challenging job. According to employees, this is the leading cause of accidents.

The opposition accuses the government of having abolished the co-responsibility of the company and the contractors it selects to implement projects. Cosco, therefore, remains out of the picture, and the responsibility for accidents is limited to the contracting companies.

EURACTIV contacted the Greek labour ministry, but no reply has been provided at the time of this article’s publication.

Following pressure by creditors for privatisations in terms of Greece’s bailout programme, 51% of Piraeus port was sold to Cosco in 2016.

On Tuesday, the Chinese company acquired another 16% shares of Piraeus Port Authority and now controls 67% of one of the largest ports in Europe.

The conservative New Democracy government says Cosco’s investment is crucial for Piraeus and the national economy and the geostrategic position of the country in the wider region.

The company said in a statement that it intends to “help the port of Piraeus strengthen its position as an important port in the Mediterranean and become an important bridge of culture, economy and friendship between China and Greece under the Belt and Road initiative”.

The 2016 agreement stipulated that the company would receive the additional share only if it completed investments in the port worth €290 million by August 2021.

Most investments remained unfinished or suspended, but Cosco got the additional 16% share as the 2016 deal was amended.

The Chinese blame Greek bureaucracy and the residents’ resistance.

However, local authorities and environmental NGOs do not share the same view, saying the company does not comply with environmental protocols and harms the marine environment.

“The communication fiesta for the transfer of 16% of the shares raises concerns about the investment climate in the country creating third-world conditions, according to which the investor imposes what he wants on the state,” Syriza lawmaker Nektarios Santorinios told EURACTIV Greece.