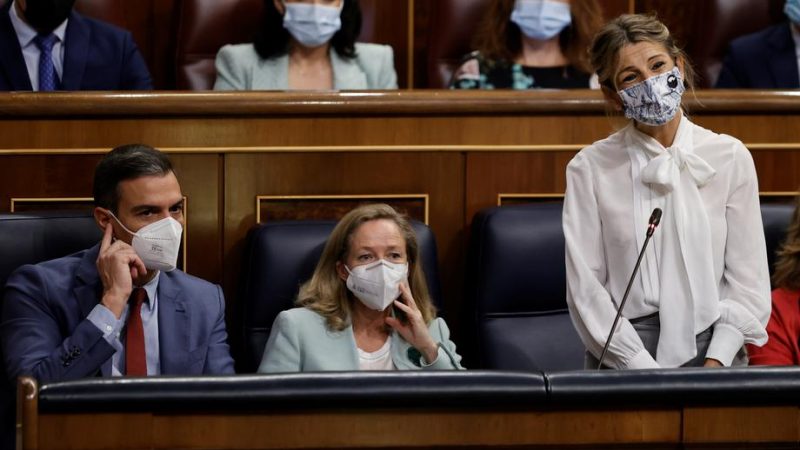 After the approval of next year’s budget, the governing coalition continues until the next general election in 2023. [EPA-EFE / Emilio Naranjo]

Díaz pledged to repeal the 2012 labour reform “despite all the resistance, which there is, and there are many”, she said. Calviño has taken a more guarded position on that “hot political dossier” and said nothing is currently being negotiated within the executive, a coalition of the PSOE and left-wing Unidas Podemos (United We Can), EURACTIV’s partner EFE reported.

Last week, at the Congress of the Socialist Party in Valencia, Prime Minister and party secretary-general Pedro Sánchez, promised to “move forward putting an end to legislation such as the (…) PP’s labour reforms, which were imposed without agreements and made contracts more precarious and devalued salaries”.

On Sunday, El País and other Spanish online media spoke openly of a “crisis in the coalition government” and a “ferocious” battle between Díaz and Calviño. Sources quoted by El País reported that Sánchez, who is more inclined to support Calviño’s position, wants to meet both ministers this week to solve the dispute.

After the approval of next year’s budget, the governing coalition continues until the next general election in 2023.

However, there are divisions on a series of dossiers, including the new housing law.

The PP government of Mariano Rajoy adopted the Labour Market Reform in February 2012. It focused on the collective bargaining system and had a strong impact on dismissal costs and procedures.

The employers’ group CEOE supported the reform but has called for more flexibility.

The country’s two main trade unions, UGT and Comisiones Obreras, complain that the reform has damaged the labour market, increasing inequalities and dramatically increasing the number of temporary jobs, contributing to a growing imbalance in income distribution across the country, in particular for young people.