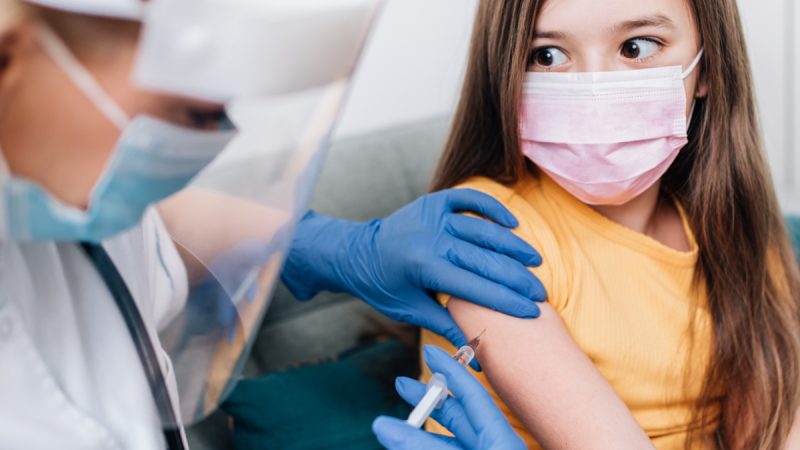 Since 15 December, when the vaccination campaign for children kicked off in Spain, over 1.3 million paediatric jabs have been administered to 40.9% of children aged 5-11. [Shutterstock / hedgehog94]

More than 1.3 million children aged 5-12 have received their first jab of Pfizer’s paediatric COVID-19 vaccine, although health authorities expressed moderate optimism about the situation as infections with the Omicron variant are rising.

The high number of teachers on sick leave, expected after Christmas and due to the spread of the Omicron variant, has so far not materialised.

Only 2.3% of teachers are on sick leave, according to data released on Friday by Spain’s Education and Vocational Training Minister Pilar Alegría, EURACTIV’s partner EFE reported.

According to the ministry’s statistics, the number of infected children below the age of 11 has followed the same trend as in other age groups: it has risen sharply since 19 December and seems to have started decreasing since the middle of this week.

Since 15 December, when the vaccination campaign for children kicked off in Spain, over 1.3 million paediatric jabs have been administered to 40.9% of children aged 5-11.

Despite Omicron’s fast-spreading nature, classes have resumed for children after the Christmas break, but with some changes. Masks have to be worn at breaks, as well as in classrooms, and there is a new protocol that avoids continuous lock-downs of classes.

The government’s aim is that around 70% of Spanish children will have been vaccinated with the first dose by the first weeks of February.

Meanwhile, some 22,000 Spanish pharmacies have started to sell COVID-19 self-diagnosis (antigen) tests as of Saturday at a maximum price of €2.94, as set by the government. Omicron’s fast spread has led to a huge increase in demand for “home tests”, EFE reported.

The Spanish “Inter-ministerial Commission on Medicines Prices unanimously approved on 13 January to set the maximum retail price for this type of antigen tests, after the high peak in demand and the subsequent price hike, which tripled in the last couple of weeks.

Unlike in other EU countries, self-diagnosis tests in Spain will continue to be sold exclusively in pharmacies, despite large supermarkets calling on the government for permission to also sell them.

Since 14 January, the 17 Spanish regions have reported new 162,508 infections, which means the Iberian country has now more than eight million confirmed COVID-19 cases since the start of the pandemic in March 2020, while the 14-day incidence rate has risen by 36 points, less than in previous days, to 3,192 cases per 100,000 inhabitants, EFE reported.