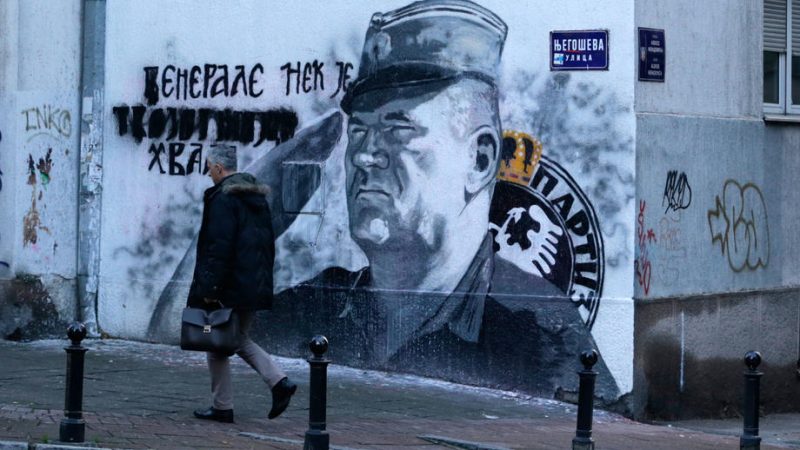 The calls come after the mural depicting Mladic appeared on a wall in the centre of the capital. [EPA-EFE / ANDREJ CUKIC]

The Serbian government must take action against the glorification of crimes against humanity and instantly remove the mural of war crimes convict Ratko Mladic, according to rapporteurs from the Parliamentary Assembly of the Council of Europe.

The calls come after the mural depicting Mladic appeared on a wall in the centre of the capital. Attempts to paint over it by members of the public were met with force by Serbian police who protected it.

They also banned activists from demonstrating against it, citing “security reasons”, and arrested two. The headquarters of an anti-war organisation was attacked, a banner calling for the Srebrenica genocide to be remembered was burned, and nationalist extremists organised counter-demonstrations.

“We are dismayed at the failure of the authorities – despite a decision of the communal police – to remove this illegally installed mural…these events remind us of the need to fight unambiguously against the glorification of convicted war criminals. Such acts undermine regional co-operation and hinder the process of European integration to which Serbia aspires: a democratic society cannot live in denial of war crimes and in a culture of hate and impunity.”

Piero Fassino from Italy and Ian Liddell-Grainger from the UK called on the Serbian authorities to demonstrate their willingness to fight firmly against the glorification of war criminals and erase the mural.