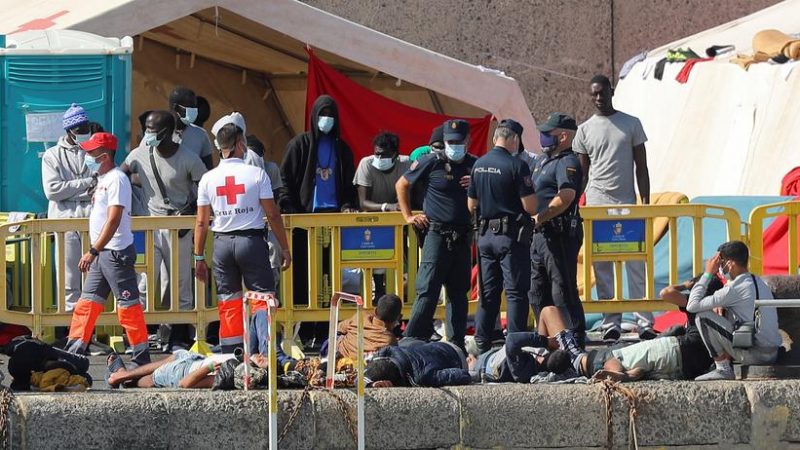 Migrants rescued by Spanish Salvamento Maritimo are taken care of by Red Cross members and Spanish National Police officers at Arguineguin's dock in Canary Islands, Spain, 09 November 2020. A total of 98 migrants were rescued when they traveling on board three small boats trying to reach the Spanish coast. [EPA-EFE/Elvira Urquijo A.]

Human Rights Watch denounced the conditions at a migrant centre set-up on a pier in Gran Canaria, saying it did not “respect people’s dignity or basic rights” and reflected poorly on Spain, Spanish online media reported on Thursday.

The NGO said in a report that although it assumed “the best intention” of workers at the Arguineguín pier in southern Gran Canaria, the conditions were inadequate and lacked equipment for basic safeguarding against COVID-19. On Twitter, the NGO called on Spain on Thursday to “respect the rights of those who arrive by sea” and reach its territory.

The Canary Islands, an archipelago off Africa’s Atlantic coast, is currently experiencing its worst migrant crisis in 14 years, EFE reported.

Hundreds of migrants are arriving from the African continent each day and search and rescue operations are becoming overwhelmed. Canary Island authorities have reported the arrival of 11,409 migrants so far this year, seven times more than recorded in the same period in 2019. Yet, Spanish Interior Minister Fernando Grande-Marlaska Gómez has said the true figure could be closer to 16,000.

“Improvising a reception and identification camp on a pier was never a good idea and now the chaos there poses a real threat to people’s rights, health, and safety, ” said Judith Sunderland, the acting deputy Europe and Central Asia director for HRW.

“Times are tough, but Spain can and should provide a humane response to people arriving on its shores.”

With an official capacity for 400 people split between 14 tents, the camp was first erected in August for medical screening and COVID-19 checks for migrants arriving at the Spanish territory, HRW said, EFE had reported.

When HRW’s acting director visited the pier, 835 migrants were being housed there. Following further migrant rescues over the weekend, which were record-breaking in terms of numbers, the population grew to 2,000. The NGO said that many migrants at the pier appeared to have been detained beyond the 72 hours allowed by Spanish law.

Spanish Equality Minister Irene Montero on Thursday called for legal and safe migrant routes to be established in the Mediterranean after an NGO rescue vessel sounded the alarm over a series of deadly shipwrecks in the region.

“It’s necessary that we listen to this heartbreaking cry and feel its pain. We are obliged to stop this human drama on Europe’s coasts,” she added. (EUROEFE with EPA)