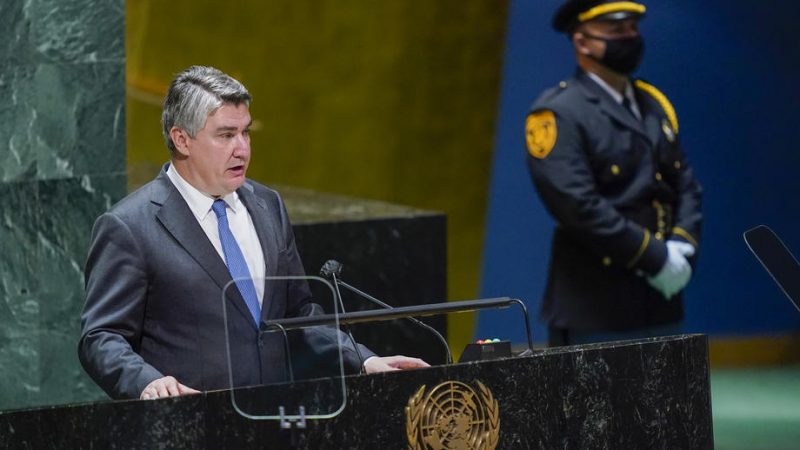 “We were talking about drama situations in the BiH, about dramatis personae”, he said. [EPA-EFE/ Mary Altaffer]

The Turkish side just announced that the meeting took place in the newly opened Turkevi (Turkish House) in New York.

On Saturday, Serbian President Aleksandar Vučić was in Ankara and met Erdoğan, also to discuss BiH.

On 29 August, the Serb member of Bosnia’s three-man presidency, Milorad Dodik, called on Milanović to act as a meditator, with the presidents of Turkey and Serbia, in talks on Bosnia and Herzegovina’s future. He said he no longer trusts international officials as so far they have represented the interests of Bosniaks, one of the three main ethnic groups in Bosnia, along with Serbs and Croats.

The meetings are not directly connected to Dodik’s call but are part of dynamised politics regarding the definition of the electoral law in BiH: Croatian PM Andrej Plenković and the international community’s High Representative in BiH, Christian Schmidt, also met in Zagreb.

Zagreb and Bosnian Croat parties have been calling for amending the BiH election law before the 2022 election to prevent the outvoting of Croats by the more numerous Bosniaks at all levels of government, in line with a ruling by the BiH Constitutional Court.

But Bosniak parties are insisting on the priority of implementing rulings by the European Court of Human Rights, which determined that BiH discriminates against citizens who are not Croats, Serbs or Bosniaks by preventing them from running for the state presidency.

During the talks, Schmidt underlined the need “to strengthen the functionality of institutions” through the enhanced engagement of all political stakeholders in BiH, with support from the international community.