Croatian president cancels attendance at a commemoration of Operation Maslenica 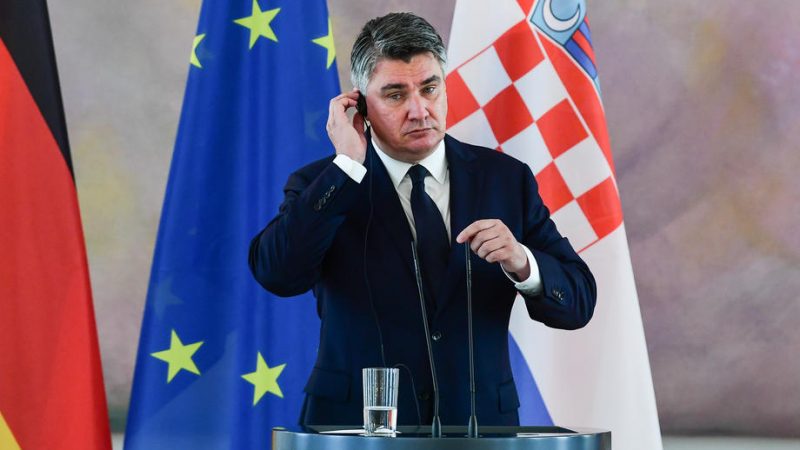 Acting on orders from President and Supreme Commander of the Armed Forces Zoran Milanović, Armed Forces Chief-of-Staff, Admiral Robert Hranj, and all other military commanders left the event after the first part of the ceremony. [EPA-EFE/FILIP SINGER]

President Zoran Milanović on Friday cancelled his attendance at an event commemorating the 28th anniversary of wartime military and police operation “Maslenica 93” in Zadar after he learned that two persons wearing clothes with Ustasha symbols were participating in the event.

Acting on orders from the president, who is also the army supreme commander, Armed Forces Chief-of-Staff, Admiral Robert Hranj, and all other military commanders left the event after the first part of the ceremony.

“The organisers said some people showed up whose attendance had not been envisaged by protocol,” Defence Minister Mario Banožić said.

The Jewish Community of Zagreb (ŽOZ) said that a majority of parliamentary groups, including the ruling HDZ, supported its initiative to agree a legislative framework and table a bill to ban Ustasha insignia and the glorification of war criminals at the meeting convened about ten days ago.

“The issue that has been discussed for years should finally be resolved and I believe it can be done by a two-thirds majority vote if the ruling party stands behind it,” said  ŽOZ president Ognjen Kraus on Friday.

The people who attended the commemoration with Ustasha insignia are claiming to be part of the Croatian Defence Forces (HOS), yet according to the Defence law, those units were dissolved as illegal. There were no members of HOS in this or the other operation, said “Maslenica 93” commanders after the incident. (Željko Trkanjec | EURACTIV.hr)