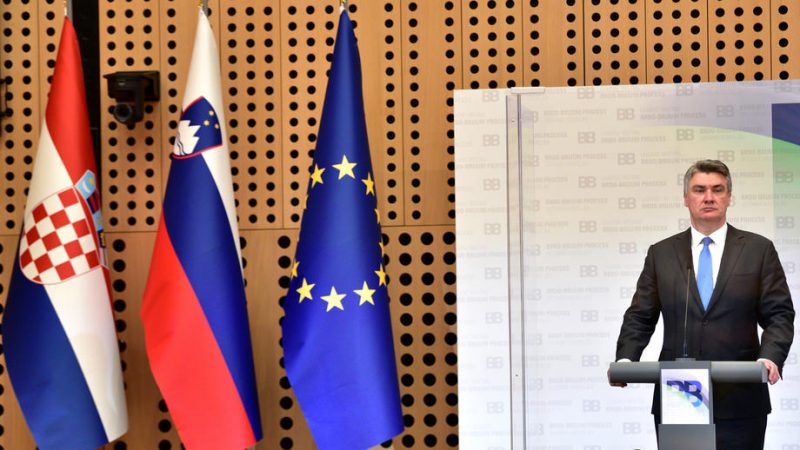 Some countries do not want the closing declaration of the coming NATO summit in Brussels to mention the Dayton Peace Agreement and Bosnia and Herzegovina’s three constituent peoples but Croatia will not agree to that, President Zoran Milanović said on Sunday. [ EPA-EFE/IGOR KUPLJENIK]

Some countries do not want the closing declaration of the coming NATO summit in Brussels to mention the Dayton Peace Agreement and Bosnia and Herzegovina’s three constituent peoples but Croatia will not agree to that, President Zoran Milanović said on Sunday. However, Foreign Minister Gordan Grlić Radman said that leaving BiH out of a NATO closing declaration was “groundless”.

“Since it’s the 11th hour, I will have to talk to some people at the summit, otherwise we will not consent to the closing declaration because we are being treated as unimportant,” said Croatia’s president, noting that “someone has a problem with the closing declaration mentioning the Dayton agreement and the three constituent peoples.”

“I do not intend to return to Zagreb with that. It shows what kind of plans for Bosnia and Herzegovina some international circles have and Croatia will not agree to that,” Milanović said, confirming that work on the declaration had been underway for a week.

However, according to Foreign Minister Gordan Grlić Radman, the president’s declaration is groundless, claiming that a formulation in one of the paragraphs proposed by the Croatian government refers to the Dayton Agreement, the constituent peoples, equality and reform processes, notably amendment of the country’s election law – and was accepted.

“We have agreed that the Dayton agreement and reform processes, that is, the election law, will be mentioned in that paragraph […] President Milanović is not telling the truth, we have all the documents,” said Grlić Radman, noting that the government had been constantly working on the protection of the status of the Croat people in BiH.

“Croatia is coming into conflict with NATO because it insists on the obsolete concept of constituent peoples,” Željko Komšić, the Croat member of the tripartite BiH Presidency elected by the votes of Bosniaks, was quoted by the BiH Presidency as saying. (Željko Trkanjec | EURACTIV.hr)