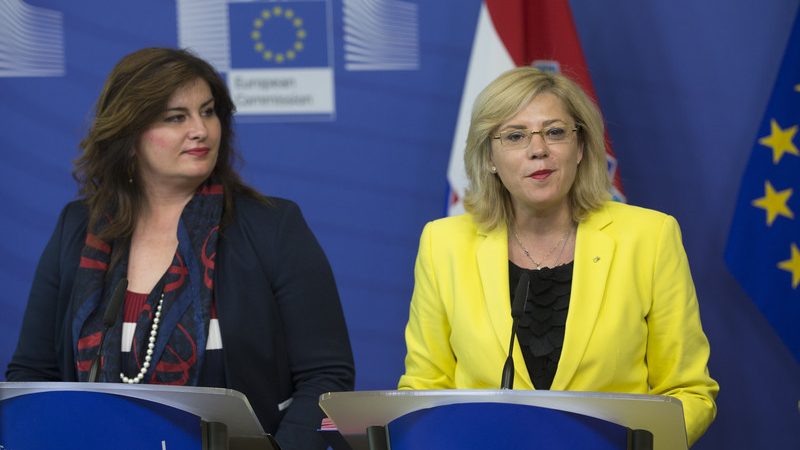 Gabrijela Žalac was arrested on Wednesday as part of operation “Software” by the European Public Prosecutor’s Office (EPPO) in Croatia. [EPA-EFE / OLIVIER HOSLET]

The arrest of a member of the Croatian Democratic Union (HDZ-EPP) Presidency and former EU Funds Minister Gabrijela Žalac led to a barrage of criticism from the Opposition against the judiciary, and its insistence that “there is no difference between Sanader’s and Plenković’s HDZ.”

Ivo Sanader was an HDZ President and Prime Minister, who is now in jail following a series of corruption convictions.

Prime Minister and HDZ president Andrej Plenković commented on the arrest of Žalac, saying “there is the presumption of innocence”.

Žalac, Central Finance and Contracting Agency (SAFU) director Tomislav Petric and two other officials were arrested on Wednesday as part of operation “Software” by the European Public Prosecutor’s Office (EPPO) in Croatia.

EPPO Croatia said it was collecting evidence regarding four suspects, in cooperation with the police anti-corruption office PNUSKOK.

The four are suspected of committing crimes in the ministry and SAFU related to the public procurement of an information system. The case concerns the design of a 16.2 million kuna (€2.6 million) software which the Ministry of Regional Development and EU Funds, when Žalac was minister, awarded to the Ampelos company.

“This is the 14th minister in the previous government to have been dismissed due to corruption,” Romana Nikolić,  a Social Democrat MP said.

“We have a serious crisis in the government and institutions because each month, former or incumbent officials or high-ranking HDZ members are being arrested”, Sandra Benčić of the Green-Left Bloc said.