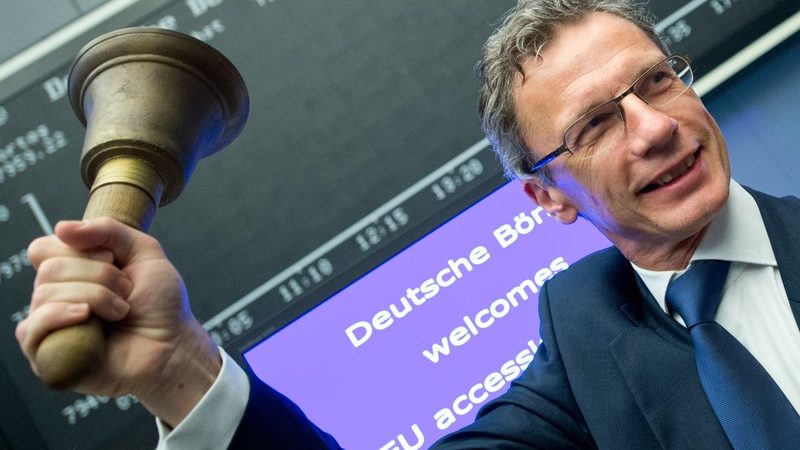 Head of the Croatian Central Bank Boris Vujcic celebrates his country's accession to the EU by ringing the traditional bell on the floor of the German stock exchange (DAX) in Frankfurt am Main, Germany, 01 July 2013. [EPA/BORIS ROESSLER]

Croatia’s GDP contracted by 7.8% in the first half of 2020 compared with the same period the previous year, Croatian National Bank (HNB) Governor Boris Vujčić said on Thursday. The fall has been blamed on the COVID-19 pandemic and natural disasters such as earthquakes.

HNB promptly adapted its monetary policies, using all the available measures with the aim of preserving the stability of the exchange rate and favourable conditions to finance citizens, the corporate sector and the state, he added.

HNB sold a total of €2.7 billion to banks after which the kuna exchange rate was stabilised, he said. The government generated a consolidated deficit of 27.5 billion kuna (€3.6 billion), or 7.4% of GDP in 2020, with the consolidated general government debt also increasing, according to a report which the State Bureau of Statistics (DZS) released on Thursday. The deficit thus ended a three-year streak of surplus.

The government on Thursday decided to reallocate 2.61 billion kuna (€348 million) in the state budget to deal with the economic fallout of the pandemic.

Finance Minister Zdravko Marić told the cabinet that the law on the execution of this year’s budget envisaged the possibility to reallocate even more than 5% of the funds defined by the budget law. The reallocation facilitated bridge financing within the state budget until its revision, expected in June, he added.