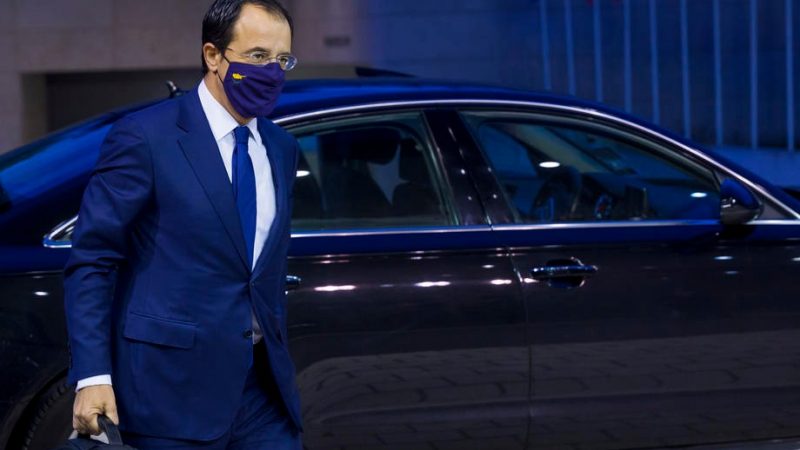 The Cypriot FM said the international community should react in the only language that Erdoğan understands: “The language of might and decisiveness.” [EPA-EFE/JEAN-CHRISTOPHE VERHAEGEN]

If the world does not react to Turkish President Recep Tayyip Erdoğan’s regional provocations in Cyprus and beyond, he will be encouraged to continue in a destabilising way that undermines US interests, Cypriot Foreign Minister Nikos Christodoulides said on Tuesday.

“The international community, the United States, have a duty not to allow President Erdoğan to transform the entire region into his playground and a source of conflict and destabilisation,” Christodoulides said.

The Cypriot minister said the international community should react in the only language that Erdoğan understands: “The language of might and decisiveness.”

The comments come ahead of a visit by Greek Foreign Minister Nikos Dendias to Cyprus on Wednesday, while the UN Security Council members will discuss the regional situation and decide the next steps.

On Tuesday, Erdogan delivered an uncompromising speech in the north of divided Nicosia, marking another step towards opening up the ghost town and former resort of Varosha, in violation of UN resolutions and slammed as “unacceptable” by the European Union.

“We don’t have another 50 years to waste,” Erdogan told a crowd at a parade to mark the 47th anniversary of his country’s invasion that divided the Mediterranean island.

The UK has also expressed deep concern over the situation. A similar stance was taken by Moscow, which condemned any unilateral move and called for solutions based on international law.

Only China, a permanent UN Security Council member, has not reacted so far.

For his part, Cypriot President Nikos Anastasiades said the only objective is to find a solution to the Cyprus problem which will result in a functional and sustainable European state, with full respect to the human and political rights of all citizens, Greek Cypriots and Turkish Cypriots.

“That is why I call on our Turkish Cypriot compatriots to realise that it is not only the fate or the rights of the Greek Cypriots that are under threat, but also their own future,” the president said.