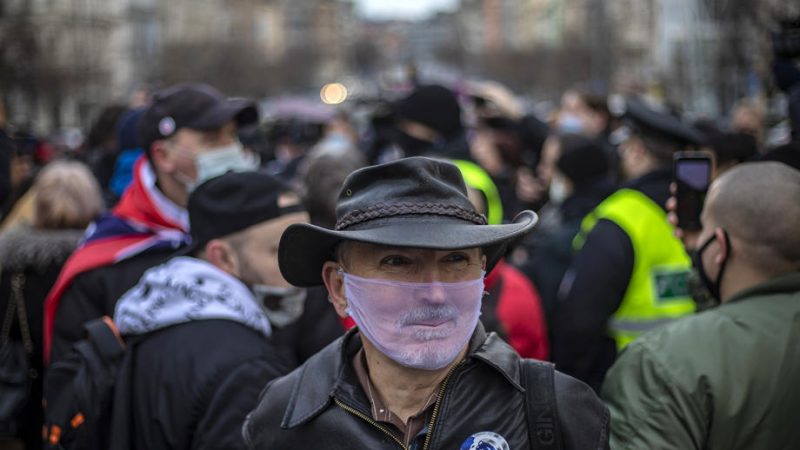 A man wearing a mock face mask takes part in a 'March of Freedom' at the Wenceslas Square in Prague, Czech Republic, 08 January 2021. [EPA-EFE/MARTIN DIVISEK]

Czech anti-vaxxers turning into pro-Russian activists. Groups of Czech activists organising mass demonstrations against COVID-19 measures openly support Russia in its aggression towards Ukraine, and their leader has business ties with Moscow.

“The US with its dollar needs a war, Ukraine with its collapsing and corrupt economy needs to find the culprit. Putin is no fool, but if genocide is occurring in the separatist republics, he will eventually have no choice but to intervene,” the most popular Czech anti-vax group, Chcípl PES, posted on its Facebook profile.

Czech daily Hospodářské noviny reported that the post was deleted a few hours later by the administrator of the social site.

“I’m standing on the side of Russia”, the popular anti-vax activist Patrik Tušl posted on its site with roughly 10,000 followers.

According to the Czech elves, an organisation of cyber activists fighting disinformation, it is evident that groups opposing COVID-19 measures are rapidly turning pro-Russian.

“In all disinformation channels, we can see that the scene moved to an intense support for Russia,” the analysis reads. “Quantitatively and qualitatively, the theme of COVID-19 is receding,” the cyber activists reported.

Moreover, the Czech news site Forum24 also pointed out that the head of Chcípl PES initiative has several business activities in Russia.