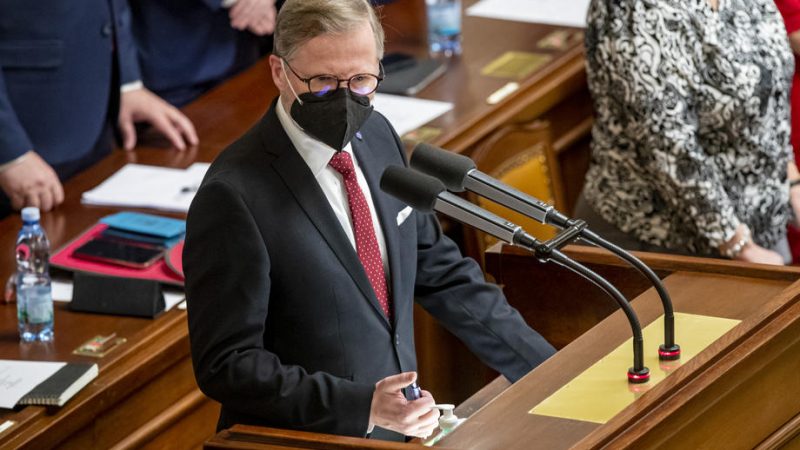 “The government will be appointed as I proposed it, including a candidate for Foreign Minister from Pirate party Jan Lipavský,” Fiala said after his Monday meeting with President Zeman. [EPA-EFE / MARTIN DIVISEK]

“I accepted this mandate. In the next days, I will continue negotiations with coalition partners about the final shape of the government,” Fiala informed.

Fiala – a political scientist and university professor – has been the leader of the Civic Democrats since 2014. Despite being previously criticised for lacking leadership skills, he managed to bring together central-right opposition parties and beat outgoing populist Prime Minister Andrej Babiš (ANO, Renew) in October’s parliamentary elections.

Fiala’s conservative block SPOLU, formed by the Civic Democrats (ECR), Christian Democrats (EPP) and TOP 09 (EPP), has already signed a coalition agreement with Pirate Party (Greens/EFA) and Mayors and Independents (EPP) on Monday (8 November). The five parties will have 108 mandates in the 200-seat parliament, thus forming a clear majority.

“Our country has to deal not only with pandemic but also with consequences of unscrupulous populism of previous governments,” Fiala said. “I am convinced that together we can renew, modernise and move our country forward,” he added.

In the following days, candidates for ministerial posts will be revealed. It is expected that the EU agenda will be managed by the European affairs minister – a new position.

All ministers have to be approved by President Miloš Zeman, well-known for his appetite in influencing the government’s formation. However, Zeman remains in hospital, suffering from chronic liver disease. As his health has improved in the past days, his powers will not be removed, as had been previously discussed.