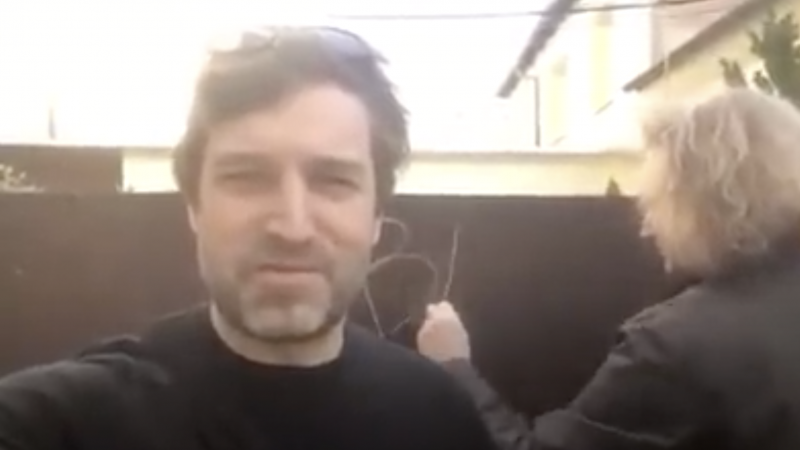 The directors of the film responded by saying they would like to withdraw their work from the film festival but that the producer will have the last word. [YouTube - Screenshot]

Czech directors Ondřej Provazník and Martin Dušek filmed a short video message to be shown before the screening of their movie Old-Timers on Thursday (April 15) at the Czech Film Carnival in Budapest, writes Parameter.sk via Respekt.cz. One of the directors wrote “Ban Orbán” on a board while the other said “our political representatives also need to be aware that maybe someone will come at the end of their lives to hold them accountable for their actions”.

After initially suggesting to either screen the video with a warning that this is not the official position of Czechia, followed by a proposal to obscure the “Ban Orbán” message from the clip, it was banned altogether by the Czech foreign affairs ministry, which funds the cultural centre in Hungary that is organising the film festival, the Czech outlet reported.

The directors of the film responded by saying they would like to withdraw their work from the film festival but that the producer will have the last word.

Meanwhile, Hungarian State Secretary for Foreign Affairs and Trade Tamás Menczer took to Facebook to say that “of course, the esteemed artists have the right and opportunity to bash the Hungarian government, as they do. There are millions of forums for this. The Czech ministry of foreign affairs has just asked them not to do so at the ministry’s cultural event.”

According to Menczer, “the Czech ministry of foreign affairs has made a respectable decision. A decision that has nothing to do with politics. It simply has to do with common sense.” (Vlagyiszlav Makszimov with Telex.hu)