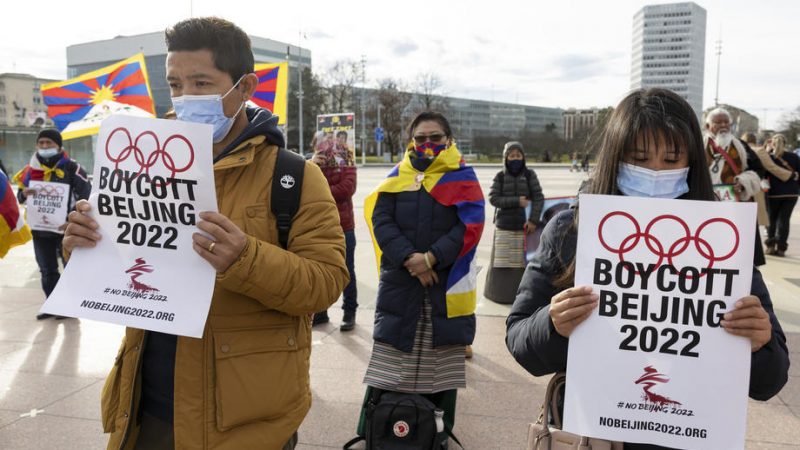 Tibetan and Uyghurs protesters call for a boycott of the 2022 Winter Olympics in Beijing, during a demonstration on the place of the United Nations in Geneva, Switzerland, 04 January 2022. [EPA-EFE / SALVATORE DI NOLFI]

Pressure to boycott the Winter Olympics in Beijing over China’s human rights situation is looming over the social democrat government as more parties in parliament are voicing their concern.

A number of countries, including the US, Australia, Belgium and the UK, have decided to diplomatically boycott the Games to protest China’s crackdown on democracy, and its treatment of the Muslim Uighur minority in Xinjiang province in particular.

In Denmark, however, the government has not yet decided whether to boycott the Games the same way despite broad consensus in parliament that it would be a good idea.

Opposition parties like the Conservatives, the Free Greens and the Liberal Alliance, and others, have declared themselves in favour of a diplomatic boycott, ideally backed by the EU.

Even the Socialist People’s party (SF), which backs the ruling Social Democrats, favours such a move with political spokesman Karsten Hønge demanding a clear position from the government.

However, taking a stance in this matter is a difficult balancing act for Denmark, experts say. Stanis Elsborg, senior analyst at Play the Game, has long followed the debate over a diplomatic boycott of the upcoming games.

“We know that it is sometimes an important part of these major sporting events that new diplomatic – not just relations but actual – agreements are made,” he told DR Nyheder.

Elsborg added that Denmark’s trade and industry minister signed a major agreement with China’s industry and information technology minister no less than six months ago to strengthen cooperation on green shipbuilding, among other things.

“So Denmark has a tradition of making important agreements with China,” he added, which makes a boycott a thorny issue for the Scandinavian kingdom.