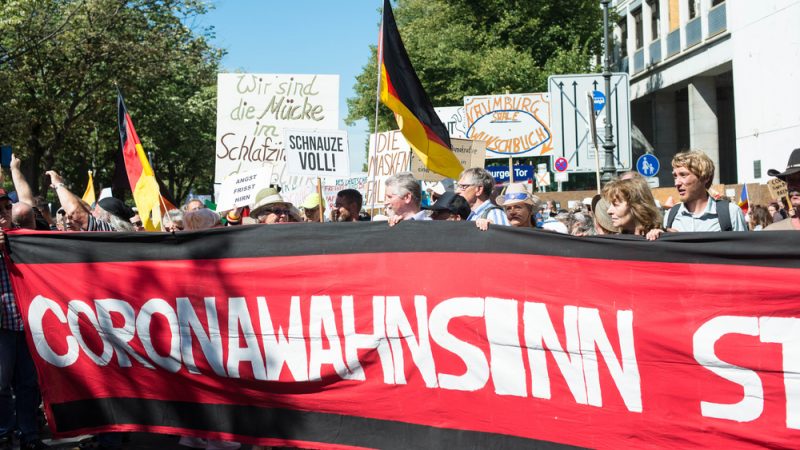 The protest was organised by the online movement Querdenken (English: think outside the box), which promotes conspiracy theories and has organised previous protests against the restrictions throughout the country. [Shutterstock/Berit Kessler]

After police tried to break up Saturday’s anti-coronavirus protest in Leipzig (Saxony) because most of the 20,000 participants were not wearing masks or adhering to distancing rules, some attendees clashed with police and attacked counter-protesters and journalists, despite organisers calling for participants to peacefully leave the area. Against police orders, thousands of protestors also marched through the city.

The protest was organised by the online movement Querdenken (English: think outside the box), which promotes conspiracy theories and has organised previous protests against the restrictions throughout the country.

The event has led to criticism of both the Saxony state government for allowing the protest in the first place (which was the result of an administrative court decision), as well as the police for their failure to get the demonstration under control and enforce coronavirus measures.

The state’s Greens tweeted: “Saxony’s security organs have lost all confidence at [the protest]. Roland Wöller’s failure to act as interior minister is no longer acceptable.” For his part, Wöller (CDU) criticised the court decision for allowing the demonstration to take place.

Meanwhile, Leipzig Police President Torsten Schultze defended his agency’s handling of the protest, saying “you don’t fight a pandemic with police means, but only with the common sense of the people.”

Federal Justice Minister Christine Lambrecht (SPD) demanded an investigation into the violence and condemned the protestors on Sunday, saying the freedom to protest was “not freedom to use violence and to massively endanger others.”

Lambrecht went on to criticise the entire Querdenken movement: “The mockery of science and the extreme right-wing agitation we have seen are abhorrent.” (Sarah Lawton | EURACTIV.de)