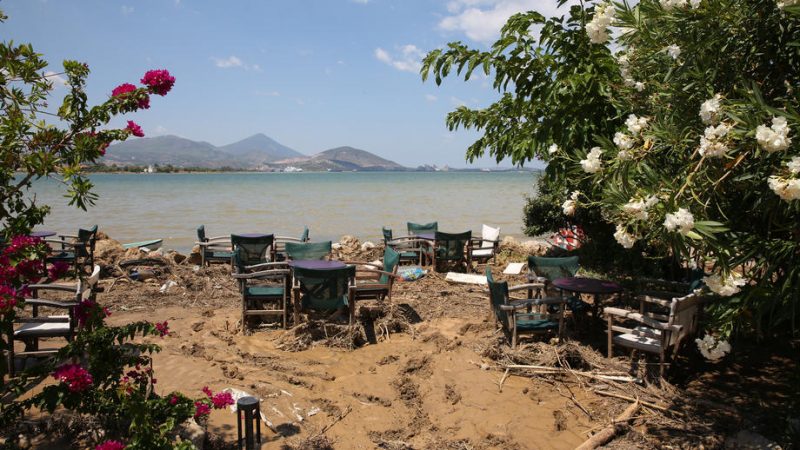 A spokesperson for the government stressed that there was a holistic plan that could not be achieved in two months and that the government’s priority was to save lives. [EPA-EFE / ALEXANDROS BELTES]

A storm that hit central Greece over the weekend has caused severe damage to the road network, houses, and agricultural properties on the island of Evia, which was ravaged by wildfires last summer.

At least 100 people were evacuated from their homes in 165 operations, according to the fire service.

The conservative government pledged a €20 million urgent relief package for compensation and the rapid restoration of infrastructure, in addition to the aid that followed the summer fires.

The opposition and local authorities complained that construction works started late even though warnings by the scientific community had been issued right after the forest fires.

Stelios Petsas the deputy minister of interior affairs, triggered strong reactions after he said the floods that devastated the island of Evia are “not related” to the wildfires that burned one-third of the country’s second-biggest island last August.

“The damage we’re facing is near the sea and does not relate to the burnt land which is higher up to the mountain”, Petsas said.

Dr Efthimios Lekkas, a geology professor and president of the Earthquake Planning and Protection Administration (OASP), said certain works to prevent floods should have been done right after the wildfires but the government failed to abide by those guidelines.

A spokesperson for the government stressed that there was a holistic plan that could not be achieved in two months and that the government’s priority was to save lives.

Former European Commissioner for Humanitarian Aid and Crisis Management Christos Stylianides, appointed in September as minister for climate change and civil protection, has made no comment.