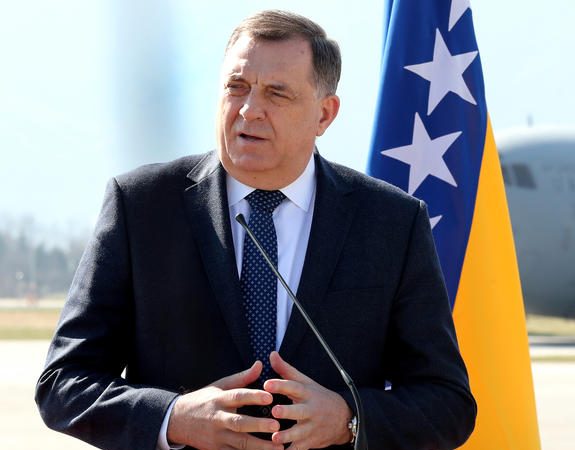 Dodik’s opponents and international interpreters of the law in BiH say entities cannot take those competencies back unilaterally, but Dodik has threatened secession if it does not happen. [EPA-EFE/ FEHIM DEMIR]

Milorad Dodik, Serb member of the BiH Presidency, has unveiled the details of meeting with US Western Balkans Envoy Gabriel Escobar he initially said was “not for the public.” According to the transcript which Dodik revealed, he told Escobar, “the new sanctions for the Balkans are not only for those who politically obstruct the progress but also for those who benefit from that.”

“Fuck the sanctions. I already went through that. If you want to talk to me, then stop threatening me,” Dodik added.

Addressing a press conference after the meeting where he read out part of the transcript, Dodik said this would be his answer to all those who threaten him with sanctions.

“I responded very precisely and clearly,” Dodik said, noting that he had an “unpleasant conversation” with the US diplomat.

Escobar spoke to Dodik days after the Serb leader announced a possibility of secession of the region within six months unless some of BiH’s Constitutional Court decisions concerning Republika Srpska are not revoked.

It is the US’ position that “threats of secession and rolling back reforms to state-level institutions are anti-Dayton and offer RS citizens nothing but isolation and economic despair,” Escobar told Dodik, according to the US Embassy’s official Twitter account.

Dodik has been on the so-called ‘blacklist’ of the US Department of the Treasury’s Office of Foreign Assets Control (OFAC) since 1 January 2017 for his obstruction of the Dayton Peace Agreement and defying the Constitutional Court of BIH. To date, the sanctions on the Bosnian Serb leader have not been removed.