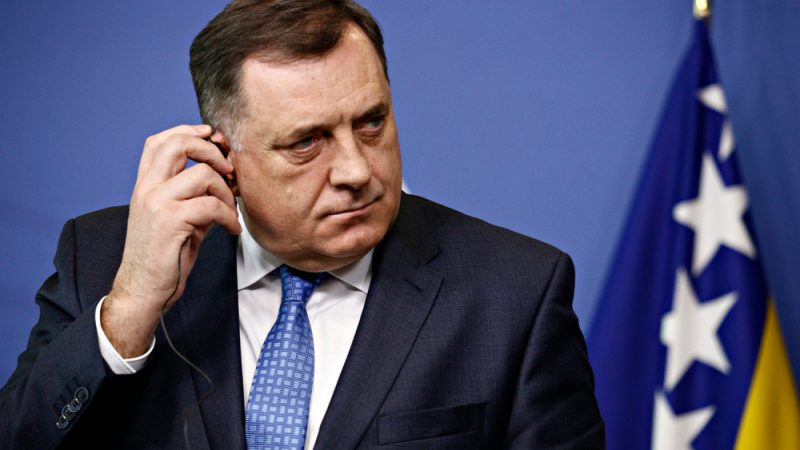 “We revived an old idea, a trilateral meeting including Turkish President (Recep) Erdogan, Croatian President Zoran Milanovic, and Serbian President Aleksandar Vucic, with the representatives of the Bosniaks, Serbs and Croats from Bosnia,” Dodik was quoted as saying by klix.ba. [Shutterstock/Alexandros Michailidis]

“We revived an old idea, a trilateral meeting including Turkish President (Recep) Erdogan, Croatian President Zoran Milanovic, and Serbian President Aleksandar Vucic, with the representatives of the Bosniaks, Serbs and Croats from Bosnia,” Dodik was quoted as saying by klix.ba.

“The idea is to find additional energy and willingness to reach a certain agreement that would further stabilise the situation in Bosnia-Herzegovina,” said Dodik, who has repeatedly threatened to take the Serb Republic out of BiH.

The Serb Republic is one of the two highly autonomous entities that make up post-war Bosnia, together with the Federation of Bosniaks and Croats.

Dodik’s visit confirmed growing concerns in the EU that non-European actors, particularly China, Russia, and Turkey, were wielding ever stronger influence in the Western Balkans, where EU integration has proceeded at a snail’s pace in the last decade.

Bosnia and Herzegovina applied for EU membership in February 2016. The European Commission adopted its opinion on the EU membership application of the country in May 2019, identifying 14 key priorities for the country to fulfil, which BiH still has not fully met.

In a rare positive development, the leaders of most BiH parties adopted in Brussels an agreement on Sunday (12 June), pledging commitment to preserving a peaceful, stable, and independent state and adhering to EU values.

Dodik said he had also discussed infrastructure projects with Çavuşoğlu, including the Sarajevo-Belgrade motorway.

“As we speak, I expect finalised talks between Serbian and Chinese companies who will work on this in the Serb Republic,” Dodik said, adding that the Turkish side was interested to see a speedy realisation of the project.

Dodik, who has been openly pro-Russian and refused to condemn Russia’s invasion of Ukraine or join in the international sanctions, said that the talks in Istanbul touched on the war in Ukraine, and that “we share many positions and values with Turkey.”

“We assess there is no need to be on anyone’s side, we need to be on the side of peace and consider the position of one’s own country.”