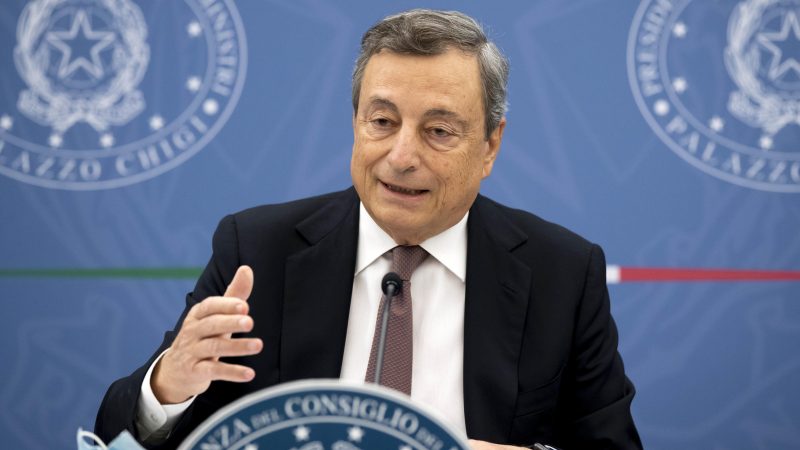 Draghi stressed that “there is no alternative to state intervention to achieve the ecological and digital transition. If the state isn’t present, these two transitions won’t happen”. [EPA-EFE/MASSIMO PERCOSSI / POOL]

Speaking to the Italian parliament ahead of the European Council meeting on Thursday, Prime Minister Mario Draghi stressed that “there is no alternative to state intervention to achieve the ecological and digital transition. If the state isn’t present, these two transitions won’t happen”.

Draghi also highlighted the need for EU members to come together to meet these goals. The EU “must combine the research, design, testing and production capabilities of all European countries to create, for example, a cutting-edge European microchip ecosystem,” he added.

Italy “strongly supports the EU Commission’s proposal to adopt a European Chips Act, which is exactly what the United States has already done, to coordinate European investments and production of microchips and integrated circuits”, he added.

In his speech, Draghi also commented on the energy crisis developing across the bloc in the past month.

“The Italian government has urged the Commission to rapidly explore the option of joint purchases and storage of natural gas on a voluntary basis with medium-term measures”, he said. Still, Italy’s “medium-term goal remains to reduce dependence on fossil fuels and substantially increase the use of renewable sources”, he said.

“At the same time, the state must protect the weakest sections of the population from the costs of energy transformation and ensure that the transition times are compatible with the adaptability of companies. For the reconversion of our economic system to be successful, the support of everyone is needed: institutions, businesses, citizens,” he added.